On top of a black "Anti-human trafficking" T-shirt, she wears a blue denim shirt with a button badge with the words "I am not for sale" pinned to her left breast pocket.

People in shopping centres always ask her about that badge, and she uses these opportunities to explain what human trafficking is. The denim reminds her of her youth in the 1970s. 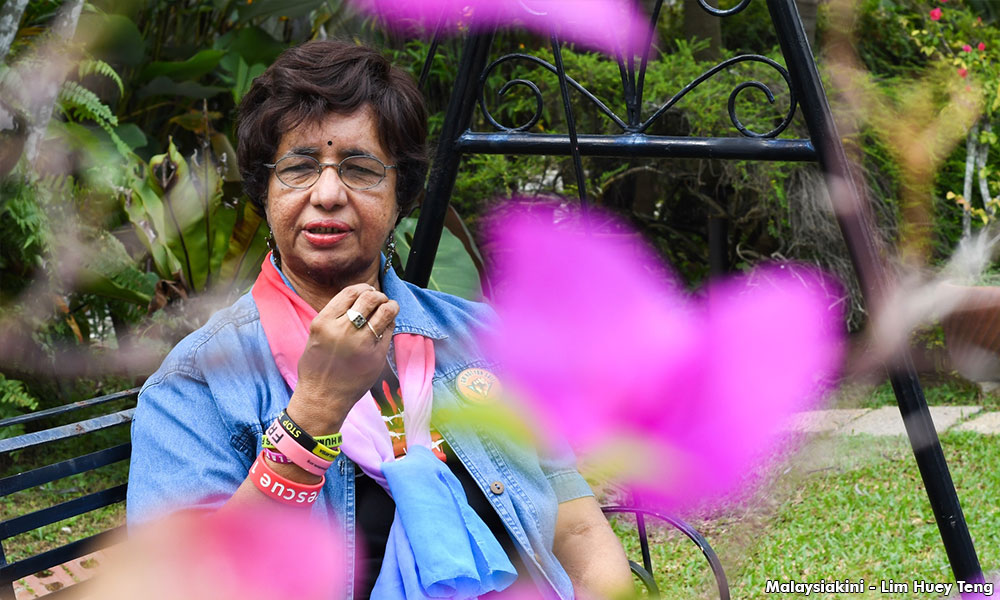 On both her slender wrists are stacks of colourful rubber bracelets with slogans like "Freedom", "Stop Human Trafficking" and "Do Rescues". A colourful scarf, "a symbol of Asian women", completes her uniform.

"What I wear is part of my activism. It is my way of educating the public," says Aegile, who is 68 this year.

Sitting on the metal swing in the garden in the compound of Tenaganita's headquarters in Petaling Jaya, Aegile shares about her 52 years in social service. This is her story in her own words:

MY PARENTS ALWAYS SAID put other people before yourself. We grew up in a rubber plantation in Sungai Petani, Kedah. My father was brought over by the British from Kerala, India as a migrant worker.

My mother, Margaret, always believed in equality and justice. She loved people.

My mother had this thing where she would open the front gate at 6am, and women would drop by for a cup of Milo and biscuits before walking to work. Sometimes they would tell my mother their problems and she would advise them.

I remember even on weekends when I would sleep in, I would hear voices in the kitchen and wondered, "Why are these people in my house so early in the morning?"

We did not have much to offer, but my mother always made extra food because she said "somebody hungry might come by".

She always reminded me, "remember you only need half of that plate of food. The other half must be given to someone who does not have food."

She also taught me that my choice of work must not be to control somebody or to make lots of money. Rather it must be about serving other people's needs.