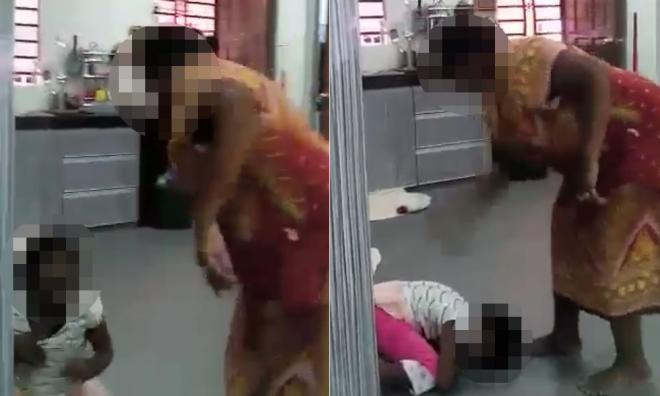 Woman in custody for mercilessly beating a child

Police have arrested a woman who was caught on video mercilessly beating a young girl with a wooden stick for spilling her food on the dining table.

Subang Jaya police chief ACP Mohammad Azlin Sadari was quoted today confirming news reports that the woman has been arrested and the child rescued, mere hours after the video of the beating went viral on social media last night.

In the video lasting almost three minutes, the elderly woman was seen shouting at the girl, in Tamil, accusing her of spilling food on the table, before proceeding with the beating while shouting "die" and "I will kill you".

The child, believed to be six-years-old, is seen crying in pain and rubbing her body while she is lashed, at least 30 times, by the woman.

When the child walks to another part of the kitchen after the beating, the woman continues to prey on her, taking off her shirt, and then slapping and kicking the girl down.

The woman can also be heard challenging the person recording the act, saying "let me see you give it to the newspapers".

Two other videos also surfaced, showing neighbours confronting the woman about the beating - in which she is seen saying that she did not beat the child as badly as people who were confronting her had made out to be.

Another video clip that went viral shows a large crowd surrounding policemen when they were taking the woman into custody in the aftermath of the attack.

A fourth video, uploaded on Facebook, shows a man claiming to be the child's father, saying the woman arrested was his mother-in-law, and that he had left the child, who is the youngest of his four children, in her care.

He said he came to know of the incident after receiving a WhatsApp video of the beating and when he went to his mother-in-law's place, there was already a large crowd gathered there.

The man, while condemning the beating, also criticised the person who recorded the incident, who did not intervene and stop the beating from taking place.

He claimed the person who recorded the incident was a woman in her 50s, similar to his mother-in law, who is known to the latter, and the recording followed a fallout between the two.

The man has since lodged a police report against both the perpetrator and the person who recorded the video, and said he would leave it to the police to decide on further action.

The beating is believed to have taken place in Puchong Perdana, but it is not clear when this incident took place.

Meanwhile, ACP Mohammad Azlin told Malaysiakini that the suspect is being probed under Section 31(1)(a) of the Child Act 2001, which provides for a maximum fine of RM20,000 or a jail term of up to 10 years, or both, upon conviction.