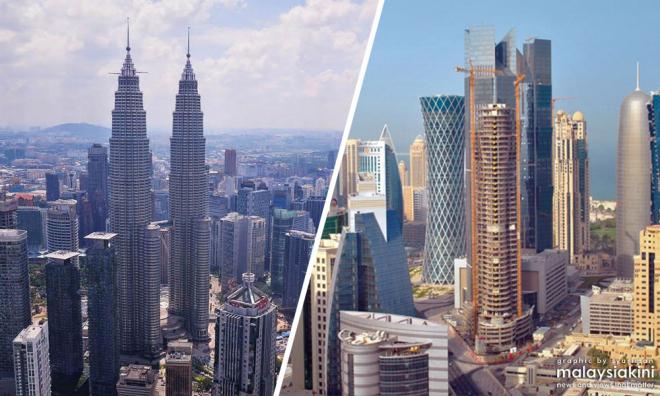 Non-Arab nations in Asia, such as Malaysia, Indonesia and Pakistan, are getting caught in the middle after Saudi Arabia led a clampdown on Qatar, accusing the tiny emirate of supporting pro-Iranian Islamist militants.

Malaysia had rolled out the red carpet for Saudi Arabia's King Salman at the end of February, the first by a Saudi king to Malaysia in more than a decade. Then, the following month, Kuala Lumpur signed a defense cooperation agreement with Qatar.

A source close to the Malaysian government said that the recent efforts to strengthen ties with Qatar, including a visit by the foreign minister last month, will probably now be put on the backburner.

"We have more to lose by siding with Qatar," said the source, who requested anonymity.

On Monday, a half-dozen countries, including Saudi Arabia, the United Arab Emirates, Egypt, and Bahrain, cut diplomatic ties with the energy-rich emirate, accusing it of backing Tehran and Islamist groups such as the Muslim Brotherhood. Qatar has said it does not support terrorism and the rupture was founded on "baseless fabricated claims."

Doha now faces an acute economic plight as it relies on Gulf neighbors for 80 percent of its food imports.

The diplomatic clamp down on Qatar is seen as an indirect jab at Iran, and leaves non-Arab Muslims countries in an "uncomfortable position", according to James Dorsey, a senior fellow at Singapore’s S. Rajaratnam School of International Studies (RSIS).

"The Saudis view Iran as the foremost terrorist threat rather than the Islamic State and a lot of non-Arab Muslim countries ... would probably not agree with that," Dorsey told Reuters.

Indonesia has called for reconciliation and dialogue in the latest diplomatic clash.

The dilemmas are particularly acute for nuclear-armed Pakistan, which has the world's sixth-largest army and the largest military in the Muslim world.

Sunni-majority Pakistan maintains deep links with the establishment in Riyadh, which provided Prime Minister Nawaz Sharif with political asylum after he was ousted in a 1999 military coup.

But with a large Shi'ite minority and a shared western border with Iran, Pakistan has a lot to lose from rising sectarian tensions. In 2015, Pakistan declined a Saudi call to join a Riyadh-led military intervention in Yemen to fight Iranian-allied insurgents.

Pakistan has maintained official silence about the latest rift in the Arab world, loathe to be seen taking sides between Saudi Arabia and Iran. Pakistan also has close ties with Qatar itself, including a 15-year agreement signed last year to import up to 3.75 million tonnes of liquefied natural gas a year from the emirate, a major step in filling Pakistan’s energy shortfall.

“Pakistan has to act very carefully. In my opinion, there is only one option for Pakistan: to stay neutral," said retired army Brigadier Shaukat Qadir, now an independent risk and security analyst.

Pakistan’s recently retired army chief, General Raheel Sharif, traveled to Riyadh in April to lead the Saudi-led Islamic Military Alliance. The stated mission of the multinational alliance is to fight terrorism but it is increasingly seen as anti-Iran.

“There are rumors flying around that Raheel Sharif is pulling out of the Saudi-led military alliance. I hope they are true and he comes back soon,” said Qadir.

Pakistani Prime Minister Nawaz Sharif in January 2016 visited both Riyadh and Tehran along with Shariff, who was then the army chief, in an attempt to bridge the deepening chasm.

Relations between Malaysia and Saudi Arabia have been in the spotlight over the last two years after Saudi Arabia was dragged into a multi-billion dollar corruption scandal at Malaysian state fund 1MDB, founded by Prime Minister Najib Abdul Razak.

Najib has denied any wrongdoing in the money-laundering case which is now being investigated by several countries including the US, Switzerland and Singapore.

But Qatar has also invested between US$12 billion and US$15 billion in Malaysia, according to media reports.

RSIS' Dorsey said non-Arab Muslim countries like Malaysia would be "put on the spot" if the Saudis demand that its trade partners pick a side.

"They (Malaysia) can say either I do business with you, or say I'm not going to make that choice. Then the question would be how would the Saudis or the UAE respond to that," Dorsey said. "But we're not there yet, and there's no certainty that it will get there."