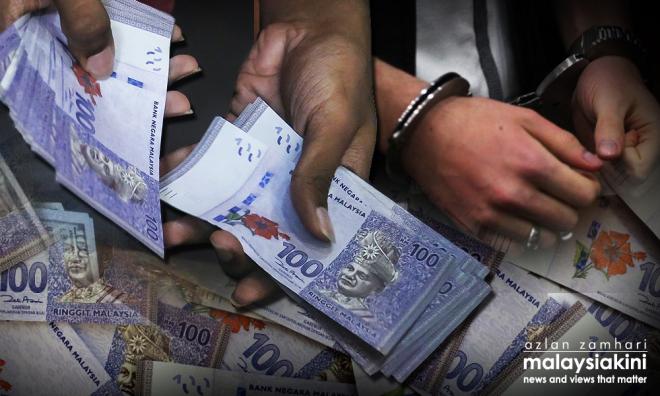 According to the Domestic Trade, Co-operatives and Consumerism Ministry, the seizures were a result of raids in Penang and Kedah.

"Action was taken under the Anti-Money Laundering, Anti-Terrorism Financing and Proceeds of Unlawful Activities Act 2001," said the ministry in a statement today.

So far, 302 companies are listed under the BNM financial consumer alert list for suspicion of not adhering to relevant laws and regulations in their operations.

Speaking to reporters in Penang, the ministry's enforcement unit director Mohd Roslan Mahayuddin said the multi-agency operation dubbed "Ops Token II" was carried out at homes belonging to three individuals involved in the Mfc Club @ Mface Club under the MBI Group at 6.30am today.

He said the raid today was a follow up on "Ops Token I", which took place on May 29 in the Klang Valley and in Penang.

"The operation was a result of information from the public and a one-month probe by the police together with the ministry's enforcement unit," said Mohd Roslan in Penang today.

"The premises raided are believed to be cash keeping transit points before the money is entered into any account involved in the scheme."

Mohd Roslan also confirmed that an individual believed to be the founder of the MBI Group was also arrested when he was found at one of the premises in Taman MBI Desaku in Kulim, Kedah.

The man, in his 50s, has been remanded for four days, said Mohd Roslan, who declined to reveal the person's name and details.

"So far, RM209 million involving 98 accounts (49 individuals and 49 business accounts) have been frozen," said the director.

"These accounts are related to subsidiaries, sponsors and those involved in their network."

If convicted, the suspects can be jailed for up to 15 years and fined not less that five times the amount involved in the crime or RM5 million, whichever is higher.

Mohd Roslan cautioned the public not to be deceived with such schemes which allegedly promise swift and high returns, urging victims to check or report the matter to the ministry, the attorney-general's chambers, police or Bank Negara.