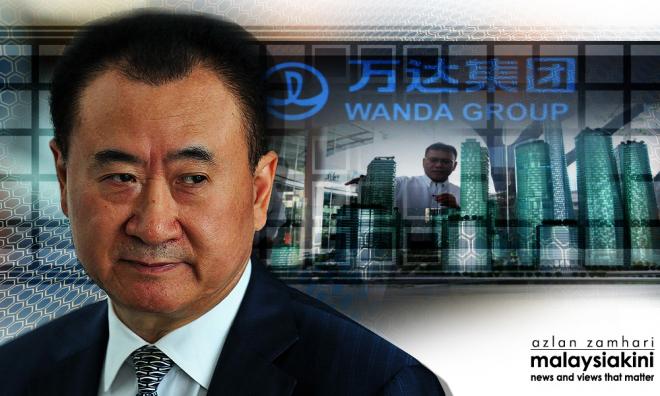 Why Wanda Group's problems show Malaysia does not understand China

COMMENT | The people surrounding Prime Minister Najib Abdul Razak, including Ong Ka Ting, the Special Envoy of Malaysia, like to insist that they know China.

Plain and simple: they don't. If they ever did, the knowledge is gained from Robert Kuok of the Shangri-La Group. Kuok is unique in the claim that he knows China for he is based in Hong Kong and is closely connected to President Xi Jinping.

But the moment people like Ong Ka Ting and Ong Ka Chuan claim to whisper into the ear of the prime minister that they, too, know China, things begin to go horribly wrong.

Take the Wanda Group, for example. Wang Jianlin - the chairman and CEO of Wanda Group - was supposed to have presided over the largest land development in China. True. But, so what? Wanda Group is also trying to go into cloud computing, cinema and only then property expansion, sensing that the latter has become a bubble economy that can go bust.

So, why would Wanda Group want to work with Malaysia on Bandar Malaysia when this is still a hole-in-the-ground project with merely some basic structures built over it, with no blueprint as yet from Malaysia?

If anything, it is the Ministry of Finance that wants to see the blueprint of Wanda Group. Now, given the tendency of Umno and Barisan Nasional to misuse public funds, as occasioned by 1MDB and Felda, why should Wanda believe that any major plans it submits will not be stolen by Putrajaya to increase the value of the land, so that Malaysia can do another parallel deal to hype up the prices of the land?

Well, that's precisely what 1MDB did with Iskandar Water Front. It took its plan of building a cavernous mall in Bandar Malaysia, assume that the high-speed railway project would be built on it, only to argue that Lim Kang Hoo of Iskandar Water Front could not afford the payment.

True or not, the act of betraying what had been agreed with Iskandar Water Front and China Railway Engineering Conglomerate, can only leave a bitter taste in Beijing - that Najib and his henchmen are out to hustle China to get the prices of Bandar Malaysia going ever upward.

But there is also another sign that Najib is out of his depth on China. It has been well known that Wanda Group is not necessarily close to Xi. If he were, the shares of Wanda Group would not be taking a serious tumble over the last few weeks in China and Hong Kong.

Surely, Wanda Group is in trouble, and the Tun Razak Exchange Square is without an anchor tenant in Malaysia, except for the US$250 million that has been pledged by Hong Kong and Shanghai Bank (HSBC). Other pledges from Indonesia had failed, too. So, it makes one wonder why the pledge from Hong Kong should make things any more sure?

Next on the list is the Ali Baba Group. Ali Baba's brand champion is Jack Ma. But he only has 16 percent of the shares in the company. Masayoshi Son of Softbank Japan has some 34 per cent alone. Wouldn't it be more appropriate to engage Son rather than Ma? Or at least a parallel engagement?

Again this shows the shallow understanding of the PM of China, both of Wanda and Ali Baba. If they could develop Bandar Malaysia, they would have done it with or without more Memorandum of Understanding (MOU). Yet, this is precisely what Najib got when he went to Beijing.

In November 2016 alone, Najib came back with 16 MOUs. But MOUs are not worth the papers they signed on. Xiamen University China and Malaysia can sign an MOU to send two monkeys to space. But if neither one has any space programmes - they don’t - the MOU is nought as indeed is the case.

Najib does not know China nor do his envoys and advisers. So it is ludicrous to see Najib and the Ministry of Finance pretend that they know China, when in fact they are completely clueless.

RAIS HUSSIN is a supreme council member of Parti Peribumi Bersatu Malaysia (Bersatu). He also heads the policy and strategy bureau of Bersatu.