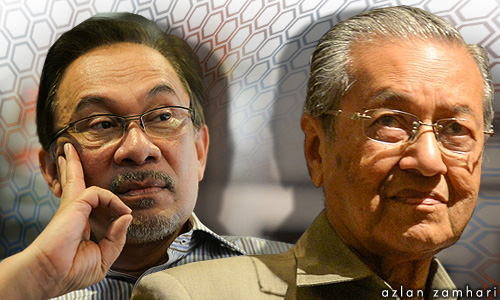 Report: Mahathir has no objection to Anwar as PM

Former premier Dr Mahathir Mohamad has thrown his support behind PKR de facto leader Anwar Ibrahim as prime minister, if he can obtain a pardon from the King.

Mahathir, who thwarted Anwar's meteoric rise in politics by sacking him as deputy prime minister in 1998, said this in an interview with The Guardian during a recent visit to London.

“In the case of Anwar, we can make a case that he was unfairly treated. The decision of the court was obviously influenced by the government and I think the incoming government would be able to persuade the King to give a full pardon for Anwar,” Mahathir reportedly said.

“In which case, he would be able to participate in politics and become PM. I can have no objection to that.”...