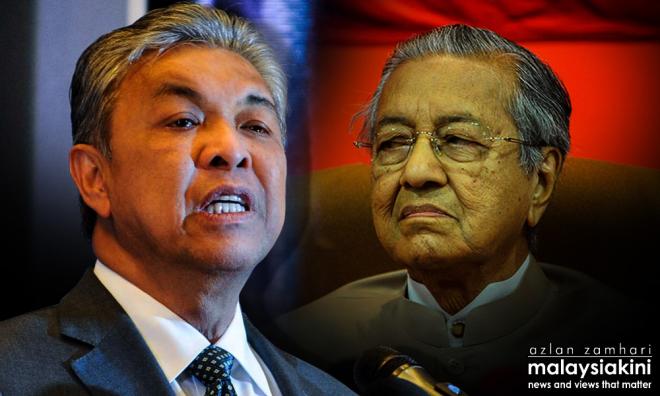 Former prime minister Dr Mahathir Mohamad has been told he needs to watch his mouth and actions seen as often disparaging the leadership of Prime Minister Najib Abdul Razak.

The Umno vice-president, who is also carrying out the duties of party deputy president, said Mahathir should rightly have manners, order and political morality when politicking.

The deputy prime minister said as a normal human being, Mahathir definitely had weaknesses and mistakes in his 22 years as prime minister but all these were covered out of respect for him.

“When our time has passed, let it pass, let history judge us, don’t condemn others as in the case of the failure of the privatisation move. We do not want to reveal the ‘sores’ and we know what he did with his numerous weaknesses that we know of.”

Zahid said this in his speech when opening the Bagan Datuk Umno division delegates meeting today.

He said Mahathir had gone overboard in his criticisms of Umno and the government to the point Najib had run out of patience.

“His (Mahathir’s) time is past, be quiet. Sit down and recite religious verses (to Allah). He unveils the flaws of the present leaders, don’t forget we also used to cover his flaws. Don’t let it be our turn to show his shame and ‘scabs’. There is so much that we can reveal.

“He (Mahathir) was strong (during his tenure) not because of him but because the Umno members strongly supported him," he continued.

Zahid also touched on Mahathir doing a U-turn by supporting Anwar Ibrahim when it was Mahathir who had ousted Anwar from the political arena.

“Now only he wants to do a  kona baring  (very sharp cornering manoeuvre). In the past, he accused Anwar of a lot of things but now says Anwar was wronged due to differing political opinions and not wanted in the political arena.

Zahid also urged that future leaders not resort to the proverbial habis madu sepah dibuang (leaving, after having fun).