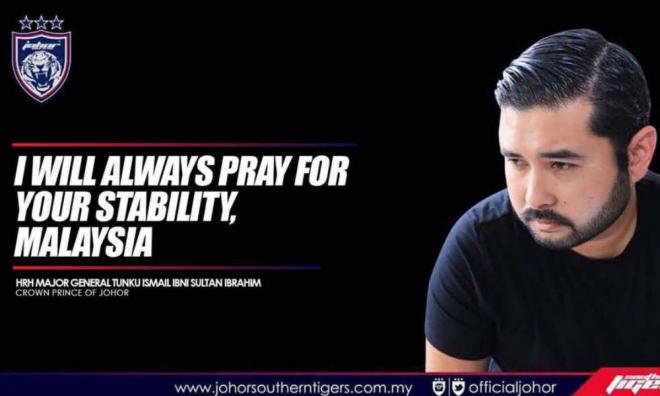 I will always pray for your stability, Malaysia

COMMENT | What's happening to a country I used to respect? A country that I was once proud to call my home.

A country that I pray for stability. What's happening to my beloved friend, Malaysia? I hope that one day, you'll be okay again.

Today, I live in a country where corruption has become a tradition.

A country in which the media protects the corrupt and victimises the innocents, to sell stories.

The uneducated are being deceived, manipulated by the system and torn into pieces.

A place where the people no longer acknowledge facts, but rather judge by the perception of what you are wearing.

Where the actors and hypocrites are hailed as heroes while the contributors and those who are dedicated to the good cause are being ignored and perceived as villains, manipulated by the pictures they see.

It has become a place where politicians are wanting to be celebrities and sportsmen.

Where a person who can't ride a horse or play polo can be selected to represent the country.

Where individuals who don't even go for proper military training can become a general.

A country where the institution is slowly losing its identity.

Leaders who act with what they're wearing, but behind closed doors, forces the government to use the people's money to pay for their private jet, are being respected.

A country where my own race has forgotten our history, heritage and culture.

A country that abandons our local traditions such as our traditional clothes and chooses to adopt foreign customs, wanting to be like the Arabs.

A place plagued by jealousy and envy. A place where you can buy titles, and now those titles have lost its value.

Some chose to keep quiet because they themselves have skeletons in their closet.

While some like me choose to speak up because we are worried about what's going to happen to our grandchildren and our future generations.

A country where individuals want to be politicians for their personal interest and no longer believe in serving the people and our institution.

Where being in denial and ignorant has become the way of life.

Where the deceiver gains more grounds and power.

Where the truth is being ignored and lies being acknowledged.

Honour, loyalty and being genuine no longer exist. What's happening to you, my dear friend?

But, don't you worry, as they are still a few that haven't lost hope.

There are still a few that will sacrifice for our future generations.

A few that will change things from within.

The vision is clear. Now is the time to implement it. Vision without execution is a hallucination. Stay strong my friend.

You'll be ok. You're fortunate to have friends such as Sabah, Sarawak and other places. Be kind to them.

Respect them. Unity is the key to success.

I wish you all the best and I will always pray for your stability Malaysia.

From your friend and a good partner, Johor. The humble servant of the Sultan of Johor and the state of Johor.

This article was first published on the Johor Southern Tigers Facebook page.