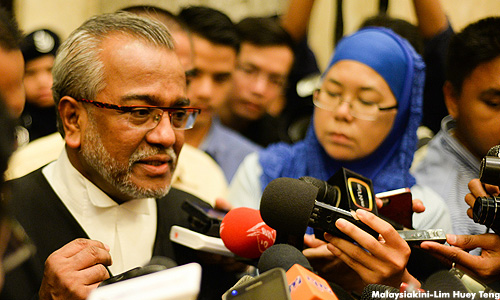 “I understand that Shafee was involved in preparing the legal viewpoint and basis to decide on Md Raus' and Zulkefli's extension of service.

“In view of this, Najib must immediately confirm if this is true or otherwise.

"If true, this must be disclosed to the public in a transparent manner,” the jailed former opposition leader said in a statement today.

Anwar also noted that the three- and two-year extensions, respectively, for Md Raus and Zulkefli have courted negative feedback due to questions as to whether the move violated the Federal Constitution.

He pointed out that even former Federal Court judges and the Malaysian Bar have interpreted the move as breaching the constitution.

“This is a critical issue as it involves the people's right to an independent judiciary,” he added.

Last Friday, the Prime Minister's Office (PMO) issued a statement that Md Raus would continue to hold the post of chief justice for another three years, beginning Aug 4, after being appointed as an additional judge, beginning from that date and for the same duration.

Md Raus' and Zulkefli's appointments as additional judges were based on Article 122(1A) of the Federal Constitution.

'Rulers agreed to the appointments'

The PMO statement added that based on Article 122 B(1) of the constitution, the Yang di-Pertuan Agong, on the advice of the prime minister and upon consultation with the Conference of Rulers that met on on May 24 and 25, had agreed to the two appointments.

Last Saturday, the Malaysian Bar described the appointments as "blatantly unconstitutional" and announced that it would hold an emergency meeting on the matter.

However, Muhammad Shafee defended the move to extend the judges' tenure as legal.

In May, Muhammad Shafee landed in the limelight after the London-based Sawarak Report website claimed that Najib had paid him RM9.5 million in two tranches.

Following Sarawak Report's claim, Anwar filed a suit on June 9 naming the government as the defendant to set aside his conviction in light of the alleged RM9.5 million payment.

Anwar is currently serving a five-year prison term after he was convicted of sodomising his former aide Mohd Saiful Bukhari Azlan.

The former opposition leader has always maintained that the charge, similar to the first, was fabricated by his political rivals, but the government has denied this.