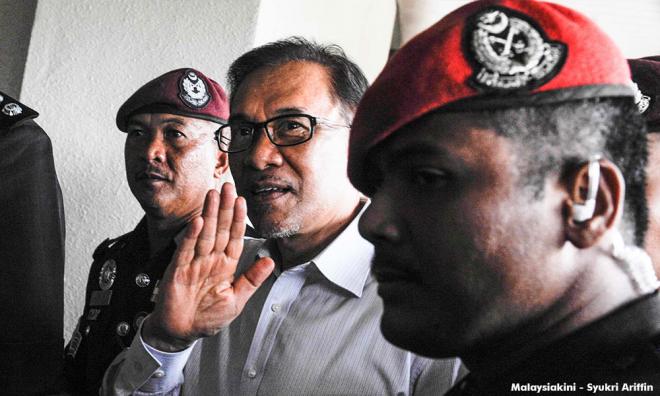 Two PAS leaders have offered differing views on former prime minister Dr Mahathir Mohamad's statement that the incarceration of his former deputy Anwar Ibrahim was "influenced by the government".

PAS mouthpiece Harakah quoted the party deputy president Tuan Ibrahim Tuan Man as saying that Mahathir's remark was consistent with what the party has been saying all along - that the former deputy prime minister is a victim of a political conspiracy until he is convicted on his charges under syariah laws.

"PAS is consistent with the belief that Anwar should have been tried in a syariah court.

"Islamic laws require clear verification of every charge. PAS has, from day one, been asking that matters related to Islamic laws should be returned to the syariah courts. This is what we hope for," Tuan Ibrahim was quoted as telling a press conference.

Anwar is currently serving a five-year jail term for sodomising his former aide Saiful Bukhari Azlan. Both he and his supporters have maintained that the charges were politically motivated.

Tuan Ibrahim said it is a given that Anwar was BN's "political victim", where he was removed from the government and subjected to the "black eye" episode.

"To me, Mahathir's statement is merely an echo of what we (in PAS) have been saying all this while. Now it has come to a stage where Pakatan Harapan has no names to put forward as prime minister candidate, and they are bringing back Anwar," he said.

He was quoted in Malay daily Utusan Malaysia as saying that Mahathir's remark reeked of desperation and was driven by personal political interests.

"Does this mean that Anwar's previous conviction for sodomy (Sodomy 1) was not true?

"If it is true, it is awkward for Mahathir to work together with a person who performs unnatural sex," Nik Amar said.

"I view this situation as Mahathir's political tactic to achieve his own ambitions. He (Mahathir) also seems so desperate to topple the BN government that he is willing to work with his own political rivals."

Mahathir, who is now the chairperson of Parti Pribumi Bersatu Malaysia, in a recent interview with the UK's The Guardian, said he was okay with Anwar becoming the prime minister, should the latter succeed in getting a royal pardon.

The decision of the court (to imprison Anwar) was "obviously influenced by the government", he had said.