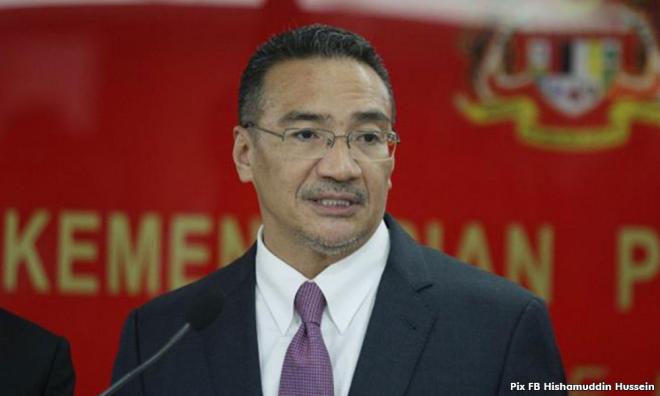 Hisham to visit Arab states to discuss IS, Qatar-Gulf crisis

Defence Minister Hishammuddin Hussein will be visiting the United Arab Emirates (UAE), Saudi Arabia and Bahrain next week to voice Malaysia's concern over pertinent issues such as Islamic State (IS) developments and the Qatar-Gulf crisis.

Hishammuddin, who is also special functions minister in the Prime Minister's Department, said it was important for Malaysia to understand the real situation of the current happenings which was very worrying, and to see whether Malaysia would be able to play any role to help overcome the situation.

"The mission, firstly, is on IS developments, the situation in Iraq's Mosul city and Raqqa city in northern Syria have been resolved. But they (IS militants) will be running away somewhere and I must ensure that they do not come to our region.

"Secondly, is to see the situation in the Gulf area, and whether Malaysia is in a position to help ensure that people don't divide us. I will meet all the leaders first. We will see and come back," he told reporters after attending the PM's Department's Aidilfitri celebration in Putrajaya today.

The event was also attended by Prime Minister Najib Abdul Razak and his wife Rosmah Mansor.

On July 6, Hishammuddin said Malaysia would study the mechanism and proactive action taken to address the growing threat of IS militants by some Middle-East countries.

He was quoted as saying that the partnership would be implemented through his official visit to Saudi Arabia, the UAE and Bahrain, as these countries were more experienced in dealing with the IS threat than Iraq and Syria .

Asked if Malaysia would act as the middle person, Hishammuddin said: "No... but we need to show concern from our region, and the fact that the Middle East looks up to us, with the King Salman Centre for International Peace to be established here (Putrajaya), I think it is important for us to find out and understand the real situation.”

Asked to elaborate on discussions with leaders of the UAE, Saudi Arabia and Bahrain, Hishammuddin said he would meet the respective crown princes of the three countries to get updates and facts in relation to the Qatar-Gulf crisis.

"We can only get all these information if we go and meet them face to face," he added.

"In Malawi, you see Saudi, Moroccan, Australian and other foreign fighters there. So the threat is real. I am not making it up," Hishammuddin said.

The fighter jet left the Kuantan RMAF base at 11am on that day (June 15) and lost communication half an hour later before the bodies of the two pilots were found at 2.30pm in a swamp forest in Kampung Yak Yah, Chukai, Kemaman.