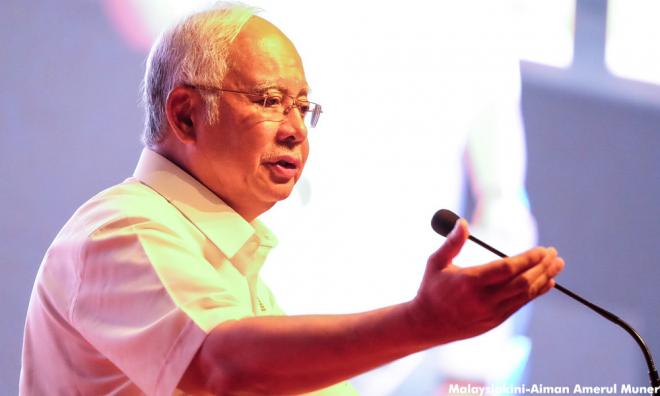 YOURSAY | ‘Why is PM using 1MDB money to pay for religious obligations of just one community?’

Odin Tajué: Imams and village development and safety committee (JKKK) heads indeed must correct the misconceptions regarding 1MDB at the grassroots level - misconceptions that have been fabricated and propagated by the media and propaganda units that the government controls.

The stories of this sovereign debt fund rival those of the “1001 Arabian Nights”.

Imagine, the deputy prime minister (DPM) of Malaysia has met the “wealthy Arab family”, who confirmed that they had presented the prime minister with US$681 million.

The said DPM has also seen a cheque drawn out for US$100 million. In the real world, no one issues a cheque for such an amount.

Imagine, the sovereign debt fund has run up debts of at least RM50 billion, but yet it is claiming to be making profits.

Imagine, the sovereign debt fund has claimed that it could pay some of its debts with what I have called ‘Husseini Units’ in one of my pieces published by Malaysiakini, which it said it owns but which is allegedly worth nothing in the real world.

There are so very many other out-of-this-world matters concerning the sovereign debt fund that, yes, those of the grassroots level must be jolted and roused to reality.

Commentable: Like a good broom, people will know if the broom ‘boleh pakai’ (useful) or not.

People judge it not by perception but fact. It doesn't matter if that person is someone rural or urban, you would know you have a good broom just by judging from its performance.

As much as you would like to paint someone as a bad broom, people are now judging you, the current broom, and asking the same question - boleh pakai?

Of course, even for a broken broom, if you dangle sweet incentives, gifts and presents in front of people, they will say you are a super broom. Some may even insist you are a vacuum cleaner, just to make your day.

Everyone knows GE14 is near, but as a PM, one needs to be more circumspect in words. Like how do you explain "1MDB has profits" when the whole world knows it has lost so much money?

Or you said "when people criticise 1MDB, we as leaders must understand". Understand what? That it is alright to use disguised stolen money (allegedly) from 1MDB as profits for welfare programmes?

Quigonbond: To dismiss serious allegations when bankers around the world have been hauled up for money laundering is like stuffing one's head in the sand.

The question is whether 1MDB-sponsored pilgrims, folks in Felda settlement and folks in rural areas will also stick their heads in the sand and pretend that corruption and abuse of power are alright as long as someone is shouting long and hard enough that he is protecting race and religion.

They may survive in their little cocoon, but they should think about their next generations.

Mushiro: PM Najib Razak claimed that a portion of 1MDB's revenue is used for various initiatives to help the people, which range from housing to education. But 1MDB cannot even service its loans and bonds.

So, are there any profits from the revenue especially when the capital is almost gone - most of the RM42 billion?

Now, my big question is 1MDB is a sensitive and questionable establishment which only the PM himself is empowered to deal in all matters pertaining to its accounts and no auditing account on it had been finalised until this very day and to make matter worse, the 1MBD audit report is under the Official Secrets Act (OSA).

So, search your soul to accept or not to accept the offer. If one has doubt (syak), one might as well start saving and go with one’s own sweat income, Insya-Allah.

Rick Teo: How can Najib justify using funds collected from all taxpayers to pay for religious obligations of just one community?

Further, from the accounts of 1MDB, there is no profit derived from its operations. So is Najib using the capital from 1MDB to pay for the pilgrimage? And is this to pacify allegations that 1MDB money has been stolen by Malaysian Official 1 (MO1) and used for his personal use?

Dont Just Talk: Najib, there is no need to fire salvos at former PM Dr Mahathir Mohamad when he is not there to defend himself. If MO1 has the balls, he should take on his former mentor in a public debate on the 1MDB financial scandals.

Sadly until now, MO1 is muted on the 1MDB scam and has relied on his boot-lickers to defend him, which is not the mark of a leader.

Another Day Another Case: Did Najib give his approval for these funds to be used? If so, here again is proof that he is the one signing off on 1MDB money. The money trail and lines of responsibility are as clear as day.

The thick-skin prime minister is asking for the pilgrims to pray for the current leadership. Isn't this bribery - asking people to pray for oneself in return for sponsorship which monies belong to the taxpayers anyway?

Anonymous 2474811496738363: I'm glad our PM found profits from 1MDB. Auditors, foreign governments, our finance minister II and the rest of us couldn't find any. We are indeed a useless lot.