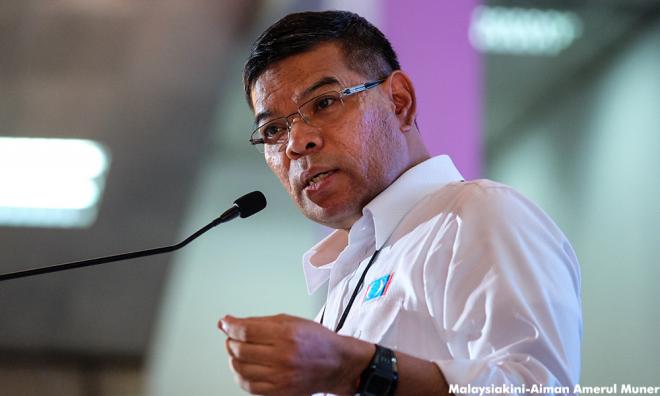 Are you out to be a politician or celebrity, Saifuddin quizzes MACC chief

PKR secretary-general Saifuddin Nasution Ismail chastised the direction in which Dzulkifli Ahmad is leading the Malaysian Anti-Corruption Commission (MACC), questioning if he was out to become a politician or celebrity.

Responding to the MACC chief's criticism of states held by the federal opposition for refusing to sign an anti-corruption pledge, Saifuddin said Dzulkifli's approach was only a publicity stunt compared to what his predecessors did.

"The Malaysian Institute of Integrity has initiatives and instruments that are far more effective in the context of fostering a culture of integrity.

"(This) is compared to efforts by the MACC chief who appears like a politician or a celebrity that is more interested in gaining media attention.

"What the country needs is a MACC chief who is effective and substantive, not a celebrity," said Saifuddin, who is also a strategic adviser for the Penang government.

Saifuddin said people did not want public relation exercises in the form of pledges.

He added that the corporate integrity pledges introduced by Dzulkifli's predecessors, but have been discontinued, were more holistic and required follow-ups.

Saifuddin also slammed Dzulkifli's Gerakan Revolusi Anti-Rasuah (Gerah) programme in which the MACC engages the public through activities such as walkabouts and open houses.

"By proposing Gerah, visiting and socialising with the people, providing food aid and making pledges, are they going to resolve corruption?" he asked.

He also questioned that despite MACC's apparent blitz against those involved in corruption, how many had actually been convicted.

Saifuddin said ultimately, the MACC was ignoring the elephant in the room, namely the multi-billion ringgit deposits received by Malaysian Official 1.

According to Bernama, Azmin said Selangor had its own way in dealing with integrity and corruption issues.

In the case of pledges, Azmin said state exco members already have to sign a pledge to say that they have no interest in the papers tabled every week and a similar pledge is also signed by board members of state government-linked companies.