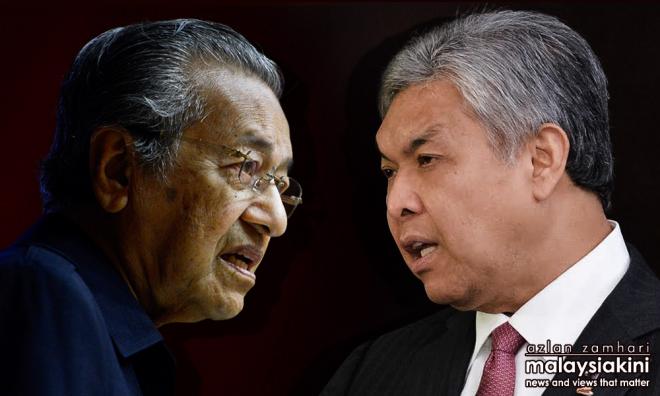 Zahid thought he could convince Najib to step down, claims Dr M

Mahathir claimed that this was communicated to him during a meeting with Zahid.

"He (Zahid) thought he could get Najib to resign, after which he would become prime minister.

"I told him, even if Najib resigns, it is not necessary that he (Zahid) becomes the prime minister, because Umno has the right to choose who replaces Najib," the former premier told The Malaysian Insight in an interview.

It is not known when the meeting took place. Zahid was appointed as deputy prime minister in 2015 after Muhyiddin Yassin was dropped from the cabinet due to his critical views on 1MDB.

In a video published on Facebook on Monday, Mahathir accused Zahid of wanting to replace Najib and that he had sought the former premier's blessings.

Mahathir also accused Zahid of failing to provide a clear answer on the alleged RM230 million in his account when he declared his assets to the former premier in 1996.

Mahathir has been targeting Zahid since the latter took a swipe at the former premier's Indian heritage during an Umno event over the weekend.

Malays used me, not the other way round

During the interview with The Malaysian Insight, Mahathir said he did not benefit personally from his 22-year reign of Umno and Malaysia.

"If I used Umno, what are the bad things that I have done? The truth is, it is the Malays who have used me," he added.

Mahathir said he was not surprised that he was being demonised by Umno leaders and the media, but he believed that the majority of Malaysians would not be convinced by the smear campaign.

"I don't think the majority of the people accept (the smear campaign). In fact, some are angry. Angry when Najib says I have done nothing.