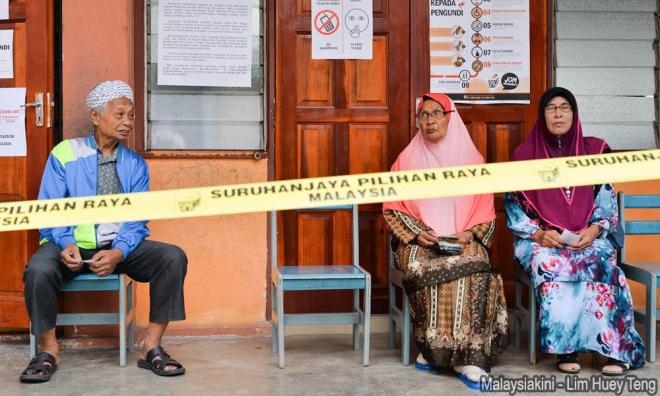 Will there be a ‘Malaysian’ tsunami in GE14?

MP SPEAKS | One of the major obstacles for Pakatan Harapan to defeat BN in the 14th general election is the ‘spoiler’ role which PAS will play in creating multi-cornered fights.

The impact of a multi-cornered fight featuring a BN candidate, a Harapan candidate and a PAS candidate can be seen in the Sungai Besar and Kuala Kangsar by-elections in June 2016 whereby the winning majority of BN increased because of the split in the anti-BN vote even though BN’s vote share did not change significantly from the 2013 general election results.

The Sungai Besar and Kuala Kangsar by-election results are the ‘worst case’ scenario for Harapan where PAS won approximately 30% of the Malay vote (but hardly any non-Malay support) and where the support for Harapan, in this case, Amanah, among the non-Malay voters fell by about 10% because of reduced turnout, especially among the younger voters, and some of the older voters drifting back to the BN. This is Scenario 1.

But a few politically significant events have taken place in the Malaysian political landscape since June 2016. Firstly, Bersatu has now formally joined Harapan which would undoubtedly increase the Malay support for the opposition coalition, including among disgruntled Umno members.

Secondly, Harapan is now in the process of being formally registered, which gives the public a higher sense of confidence that there is a strong and credible alternative coalition to the BN. Thirdly, PAS has shown its ‘true colours’ when it announced that it was no longer cooperating with PKR thereby further isolating itself politically. Of late, PAS under Abdul Hadi Awang’s leadership has become the greatest champion and apologist for Prime Minister Najib Razak.

There is also a chance that the conditions will be created for a “Malaysian tsunami” to take place in GE14. In this scenario, Scenario 3, BN loses 10% of Malay support and a further 5% support among non-Malays (compared to GE13). PAS, because of its isolated position and also the public perception that it is being ‘used and abused’ by Umno, only managed to win 10% of Malay support.

Table 1 below summarises the changes in the level of BN support and the project PAS support among Malay, Chinese, Indian and Other voters in GE14.

Under Scenario 2, where the BN backlash is not sufficient to create a Malaysian tsunami, BN and Harapan would end up with 80 parliament seats each with PAS winning only two parliament seats.

Under Scenario 3, a Malaysian tsunami would leave the BN with only 50 seats and Harapan winning an overwhelming majority of 113 parliament seats in Peninsular Malaysia. PAS would be left with only two parliament seats.

Are the conditions ripe for a ‘Malaysian’ tsunami? There are definitely signs pointing to this becoming a reality in the coming general elections. Previous ceramahs in rural areas that were only attended by a handful of people now see people turning out in the hundreds.

When Bersatu leaders such as Dr Mahathir Mohamad and/or Muhyiddin Yassin are present, the numbers can easily swell to the thousands, including the Felda areas which were previously ‘no-go’ areas for the opposition. Recent survey results also indicate that PAS is losing ground among the electorate and the perception among Malay voters that the RUU355 issue is being used by Umno to ‘manipulate’ PAS is also growing.

With this in mind, I call upon Malaysians of all races and backgrounds to unite together to create a ‘Malaysian’ tsunami which will wipe out BN in the next general election and allow the country to start on a clean slate with Harapan leading the way to a better and brighter future for the country.