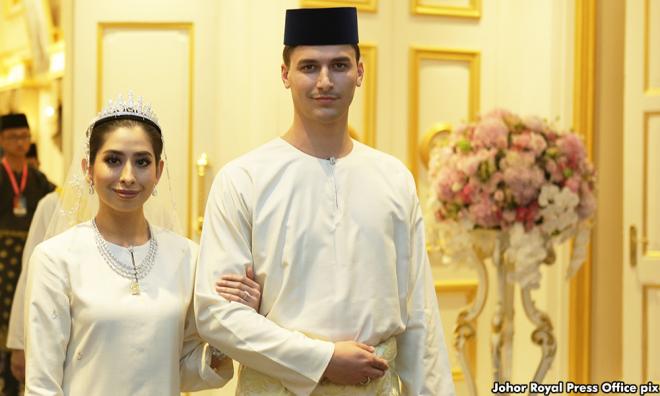 Johor Princess Tunku Tun Aminah Maimunah Iskandariah Sultan Ibrahim is getting her new home ready for a new chapter in her life: as a married woman.

It will be a new experience for her - to live with her husband-to-be, Dutch-born Dennis Muhammad Abdullah after their wedding in Johor Bahru on Monday.

"We will move into our own home and start life anew as husband and wife," she told the Royal Press Office.

"This will be the first time I will be living alone, and away from my parents and family," she added.

Later that evening, the new couple will have their ‘Bersanding’ (sitting-in-state) ceremony at the Throne Room of the Istana Besar Johor Bahru.

Both ceremonies will be steeped in Johor royal tradition and customs, with the bride donning a traditional ‘Baju Kurung Teluk Belanga’ and the groom wearing the ‘Baju Melayu Teluk Belanga’.

The ‘Baju Kurung Teluk Belanga’, introduced in the late 19th century during the reign of the late Sultan Sir Abu Bakar, has no collar and the neckline is stitched in a style known as ‘tulang belut’ (eel's spine).

This official Johor dress originated, as its name implies, from the island in Singapore, which was previously the capital of the state of Johor.

Some 1,200 guests will attend the simple but elegant wedding ceremony which will also be relayed ‘live’ for the public to watch from giant digital screens at the Dataran Bandaraya and Johor Bahru City Council building.

Tunku Tun Aminah said she was attracted to Dennis Muhammad because of his "gentle and kind personality".

"He is also very supportive and understands me well," she added.

Dennis Muhammad, who embraced Islam even before he had met Tunku Tun Aminah, said he felt honoured to be accepted by the Johor royal family.

"Tunku Tun Aminah is very special to me. She is sweet but is also sensible and has very strong family values. She is very close to her family, the same way I am with my family back home in Holland," he said.

Dennis Muhammad said that despite being married to a royal, he would still work because his father had always stressed upon him the importance of working hard and earning a living.

He now holds a senior position in a major property development company in Johor Bahru.