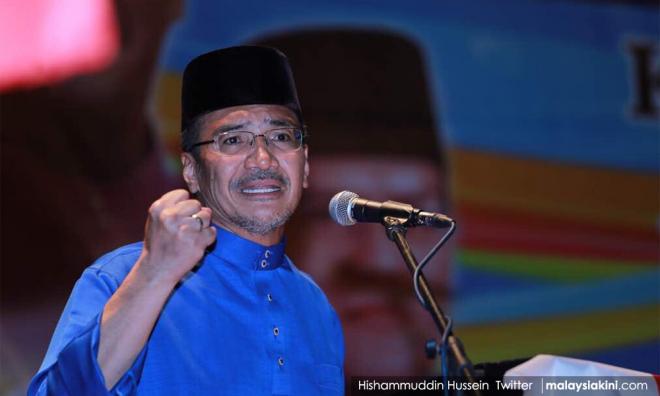 Dr M is desperate if he wants PHM to join opposition, Hisham says

Hishammuddin, who is also defence minister, said Mahathir was also seen to have acted in total disregard of other parties in the pact as the meeting was held without any discussion with them first.

“It is probably a desperate move because he simply left other leaders in the opposition pact out of consideration... maybe he just followed his desires, or perhaps personal and emotional considerations.

“No teamwork spirit... and this is before they can even form a government,” he told reporters after opening the Paya Besar Umno division delegates conference here today.

Hishammuddin was responding to PKR deputy president Mohamed Azmin Ali’s statement that Mahathir’s call for PHM to join the opposition had never been discussed before by the opposition pact’s top leadership.

“I hope the people can judge for themselves, do not sacrifice peace and harmony. I am not saying that BN is perfect, but the alternative is actually not a good option either,” he said.

Meanwhile, he said Umno's election machinery had travelled to 22 of the 191 divisions across the country to explain to the grass roots about the 2014 election guidelines manual to help Umno and BN to win the GE14 through a series of workshops and briefings.

The manual, among others, includes strategies to win the hearts of the voters, including young people, soldiers and other government employees through the integrated movement of Jalinan Rakyat (JR) by Wanita, Youth and Puteri to help BN candidates win.

He also hoped that the same manual would be adopted by all BN component parties as there were certain areas requiring high spirits and enthusiasm from the component parties so that ruling government will be able to retain power.