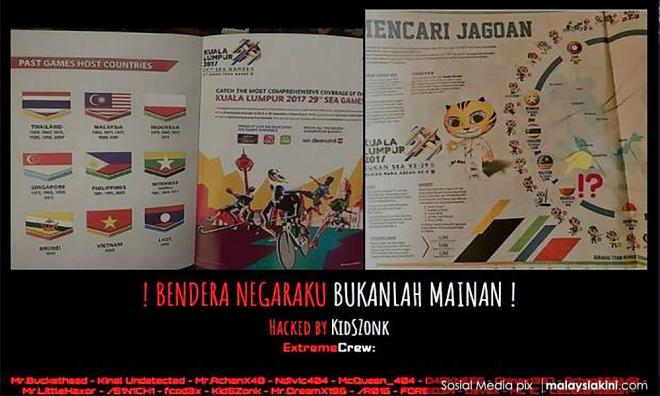 Indonesian hackers purportedly defaced more than 30 Malaysian websites yesterday over the upside-down image of the republic's flag that was printed in this year’s SEA Games souvenir booklet.

A group of Indonesian hackers, calling themselves the ExtremeCrew, claimed responsibility for the attack, newswire service AFP reported today.

The ExtremeCrew posted an image of the upside-down flag in the booklet along with the message "My national flag is not a plaything" on 33 Malaysian websites.

The Malaysian authorities are investigating the attacks, according to CyberSecurity Malaysia chief executive Amirudin Abdul Wahab.

"The incident is real and we are doing the investigation, monitoring and working closely with other agencies to mitigate this incident," Amirudin said.

Meanwhile, the Indonesian police said it was not clear as to whether the perpetrators were Indonesians.

“If they need our assistance, of course, we are ready to help, but it’s still not confirmed these hackers are even Indonesians,” Indonesian national police spokesperson Martinus Sitompul said.

The Indonesian flag features a red stripe above a white stripe. However, a flag with the colours in reverse order was identified incorrectly as the republic’s flag in souvenir books distributed during the SEA Games opening ceremony.

The image appeared alongside the flags of all other Asean countries and the year in which they had hosted the SEA Games.

Youth and Sports Minister Khairy Jamaluddin and Wisma Putra have apologised for the upside-down flag incident.

Also, a peaceful protest was held in front of the Malaysian Embassy in Jakarta yesterday by 50 members of an NGO known as Laskar Merah Putih.