For film director Anna Har, making short films has always been her passion.

Her "baptism in filmmaking", as she put it, came in 2002, when she documented protests by indigenous women against the development of the Bakun dam in front of Parliament.

Police unleashed tear gas on the protesters and Har too was not spared. But this did not deter her passion in filmmaking.

Fifteen years on, Har now organises the Freedom Film Festival (FFF), a festival for filmmakers and activists to showcase their works and advocate their causes to the public.

The festival has grown steadily since it started in 2003, initially under the wings of Pusat Komunikasi Masyarakat (Komas), and can now easily attract between 200 to 300 people per screening.

In total, the festival attracted more than 2,000 people last year.

Speaking to Malaysiakini, Har related on the inspiration behind the festival, and how she first got involved with the festival in 2003.

"After graduating, I wanted to find ways to use what I studied to complement my understanding of society.

"And so, I started working with Pusat Komunikasi Masyarakat (Komas) to make documentaries," the broadcasting graduate from Universiti Sains Malaysia (USM) said.

Before a platform like FFF existed, Har said her fellow filmmakers could only screen their works on community issues to those affected; small groups and family members.

"I went to a village in Sentul once and saw how people were being pushed through the doors to make way for their eviction. After compiling the footages into a film, we held a screening with the villagers.

"What started as a small initiative to set up screenings in communities has now grown to a platform to support films on social issues," she said.

It was the death of a friend in the course of making a documentary about the plight of indigenous people in Sarawak that led Har to believe that their important work had to reach a wider audience.

"In 1993, one of our colleagues, Justin Louis, went to Sarawak on a fact-finding trip, after receiving word of human rights abuses against the indigenous Penan women. A group of eight to 10 people travelled to the site, through the Baram River.

"Sadly, the boat overturned, and Justin drowned. On the 10th anniversary of his death in 2003, we decided to create this festival in his memory, in honour of the work activists like Justin did," she said.

The FFF has come a long way since it was first conceptualised and organised by Komas, leading to the creation of the Freedom Film Network, a non-profit organisation dedicated to the festival.

"Initially we just had friends from abroad sending their videos to be screened. Then, others started getting inspired.

"Now we have local talents taking part in our festival," said Har, who is FFN executive director.

Har also conducts roadshows and writing workshops across the country to promote filmmaking.

She noted that the work of a documentary maker on social issues is not financially rewarding, calling it "a middle-class hobby" of hers.

"Some filmmakers do leave the field and go on to work in more established fields, like in the commercial industry.

"The problem here is that we don't focus as much as we should on film work. Our films also don't get due recognition," she said. 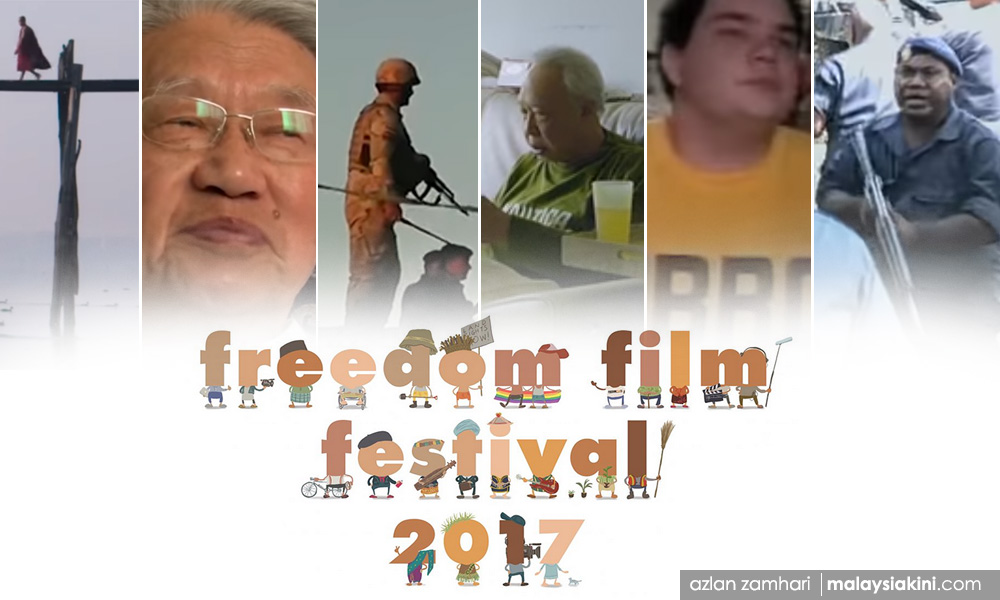 Nonetheless, Har hopes FFF can encourage and inspire members of the public to support such films and for local filmmakers to make quality productions.

The FFF 2017 will return to the PJ Live Arts Centre from Sept 2 to Sept 9, during which 40 films will be screened.

Among these will be a host of award-winning international films featuring stories about grassroots activists in Barcelona ('Ada for Mayor') and Delhi ('An Insignificant Man') as they tirelessly campaign for social justice.

Also to be featured are at least 10 local productions that take a look at pressing issues in Malaysia, such as the plight of the Rohingya refugees ('Selfie with the Prime Minister') and misconceptions about the Orang Asli community ('Journey to Raya Padi').

An all-access pass worth RM280 is currently being sold at an early bird special of RM100. Students and senior citizens get a 50 percent discount.

The full list of films to be screened is available here.

Read more from this author :
Vinodh Pillai
Read more like this :
#freedomfilmfest
View Comments
Most Read
Most Commented
Most Recent