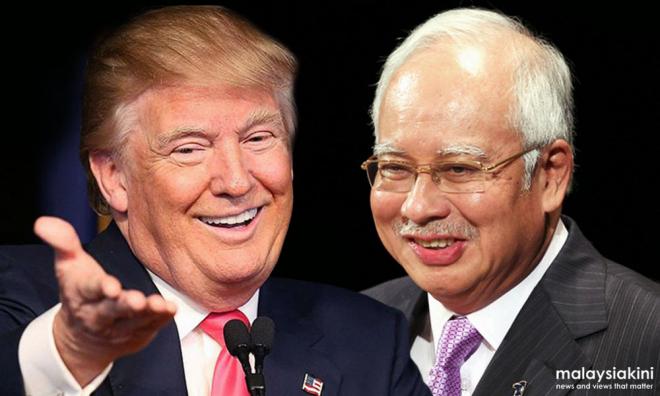 Najib's US trip has all the ingredients for a PR disaster

COMMENT | By going to the United States next month, Prime Minister Najib Abdul Razak is reviving an old but same trick.

Prior to the 2013 general election, for instance, Najib made a trip to Gaza.

He stood on the rubble of Palestine, squinted his eyes in the sun, promised to work closely with Hamas, indeed, to defend the whole of Palestine if need be, yet ended up with zero deliverables.

The trip to the United States will have all the drama of Gaza, invariably, the same outcome too.

The Gaza trip, arranged by Nasharudin Mat Isa, the former deputy president of PAS, served to underscore the Islamic credentials of Najib. This was effectively PAS leveraging on its Muslim Brotherhood connections to make Umno more kosher.

But Najib is a man in chains. He is not as free as he assumes. Nor is President Donald Trump. Due to numerous mistakes, both have allegedly made. Both leaders have stirred a hornet's nest. Their popularity is dipping, not gaining.

How can either one of them gain from any bump in the polls? Trump is a reviled political figure in the US if not the world. He luxuriates in controversy and notoriety.

Najib, on the other hand, is losing his grip on Umno and the government. A trip to the White House when the House itself stands divided is an invitation into a hall of mirrors - where Najib himself will see his own dysfunctions.

Regardless of which issue Najib seeks to discuss with Trump, none of them can gain any traction. On the Trans Pacific Partnership Agreement (TPPA), US is out. Malaysia wants in, but it is impossible for Najib to change the mind of Trump when Najib himself has parked Malaysia on the corner of China.

On North Korea, Malaysia lacks the strategic depth and diplomatic pull in Asean to convince Pyongyang to behave. Yet the North Korean issue has reached a point of no return where Kim Jong-un already has Inter Continental Ballistic Missiles with nuclear capability.