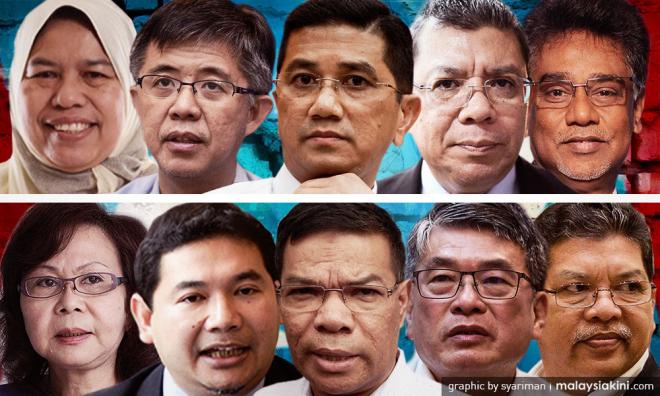 The PKR political bureau will convene for its weekly meeting tomorrow, where heated exchanges are expected amid a split on whether to continue electoral negotiations with PAS.

The planned meeting, which was moved earlier to 3pm due to the SEA Games football final between Malaysia and Thailand at night, was confirmed by PKR political bureau members from both the pro-PAS talks and anti-PAS talks factions.

At a three-hour Pakatan Harapan meeting tonight that ended after midnight, the opposition coalition, in which PKR is a member, declared that it will not work with PAS.

"Pakatan Harapan will not cooperate with PAS in the 14th general election (GE14).

"Pakatan Harapan is preparing its strategy for the possibility of three-cornered contests in GE14," Harapan said in a brief statement after the meeting.

The real showdown will be tomorrow, where those in favour of pursuing talks with PAS are expected to train their guns on PKR vice-president Rafizi Ramli.

This group, having already had a rocky relationship with Rafizi, is angry at the Pandan MP for aggravating the situation by calling a special congress to vote on whether PKR should continue negotiating with PAS.

Fireworks had erupted even before the meeting.

Shortly after Rafizi released his over 2,000-word essay speaking out against continued negotiations with PAS, PKR supreme council member Latheefa Koya unleashed her wrath on him.

Rafizi had named Latheefa as among those who were in favour of the PAS talks and were taking a pragmatic approach.

"Look at what has been done by this cancer. He is forcing the party to split into two. He has not attended meetings. He merely dares to speak in the media. This is a fool's act," Latheefa said in reference to Rafizi...