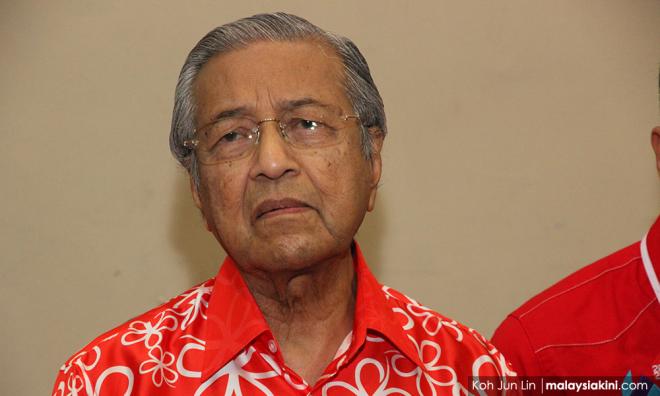 YOURSAY | 'In M’sia, when you are in the 'bad books', your name would be erased.'

Dr M chides his 'omission' from history in civics book

CQ Muar: This is about the most preposterous thing I ever heard in my entire life. Even in school back in the old days, I was taught history and learned about the past (people and events), but never heard about changes in history to accommodate certain individuals due to personal animosity.

History records data based on facts, and such data can never be changed or erased. And now, Malaysia once again has created history by deleting or omitting in our civics books mention of Malaysia's longest serving prime minister. What else can't Bolehland do?

Newday: Well, Ministry of Education, instead of lodging police reports over the omission, shouldn't you just order the withdrawal of the book from school curriculums? Because, as you say, it is not authorised? Or was it?

Anonymous 539281478077880: When you are in the "bad books" of the present political leaders, your name would definitely be "erased". That's what we call history.

Many changes had taken place in our books right from the Malacca Sultanate onwards. Many true facts had been amended to create a wrong view of modern history.

Whatever you may say, definitely PM Najib Razak's name would one day be inscribed in the history of Malaysia, as a ...

Records of Malaysia's history is teeming with such distortion of facts and the truth, from the smothering of ancient Hindu sites to the edits in the pages of books on the past, even at the museum.

Malaysians are no longer exposed to once-famous individuals like Parameswara, Hang Tuah, Yap Ah Loy and others who, for better or worse, had played a role in Malaysia reaching where it is now.

The irony is that even a much-loved and respected national leader like Tunku Abdul Rahman was once erased from history. And this during Mahathir's time.

Perhaps it is bravado when he claims that the removal of any mention of him from books and halls means nothing to him, maybe at 92 years of age these are trappings of glory he does not care about.

Yet, how vigorously spins the wheel of karma. Perhaps in years to come, people may wonder, "Najib? Who is he?"

I pray that day never comes.

Baiyuensheng: This is just like when you, Mahathir, and your administration 'wiped' the Chinese contributions off, especially their role that led to the independence of Malaya.

Those sons of the soil like Communist Party of Malaya (CPM) leader Chin Peng and their efforts to fight against the British colonialists and Japanese invaders.

Chin Peng's ashes are still shut out of the country.

And don't forget the racist BTN (Biro Tatanegara) programme that you had instituted ... now probably working against you. Yes, karma sure works fast.

MTU: Parameswara was a Hindu. Hang Tuah and gang is said to have been Chinese. A large number of Malay words come from Tamil and Sanskrit. The ‘ketuanan’ species, however, cannot stomach this. Anyway, history can never be distorted.

Anonymous_1421406986: Who started the process of defacing Parameswara, Hang Li Poh, Hang Tuah and his band of brothers from the pages of history?

Where is there any mention of the Chinese and Indian contributions in our history books, with regard to the original development of this country, those who had worked in clearing jungles to convert them into plantations, or worked in the railways and the tin mines?

The things we do come back to haunt us.

Aziz Kader: It is the norm now to cheat our history by taking the Sri Vijaya Kingdom out of Tanah Melayu.

Leanburn: Indonesia, for example, doesn't forget her history, and in fact celebrates its richness.

However, we do not need to fret. There's always Wikipedia and other sources far more superior than local textbooks. The more you read local ones, the lesser you know. People know better now where to get information from.

Bad Head: How could Malaysia progress when the government mixes politics with education? Worst still, they rewrite our history. Malaysia boleh.

Jialat: Very soon our history books will begin with the phrase, "It all started when Umno began." The ending will also be the same, after GE14.

Clever Voter: Gerrymandering has been effectively deployed by BN to win seats, especially marginal seats. Mahathir should know better. The electoral system is now constructed to favour the establishment, but it doesn't guarantee one hundred percent success.

Much work has to be done to persuade local voters to tick the appropriate box. The system is workable despite the weakness. There are thousands of eligible citizens who haven't registered, and parties have been working hard to do just that. Marginal seats are prime targets.

The electorate, in the final analysis, will still be convinced of an alternative government, and not an opposition government. That's the difference.

Just a Malaysian: Gerrymandering was much used by Dr M in his day. Lots of misdeeds during Mahathir's time were committed in the name of defending Malay supremacy.

Misdeeds are double edged swords, they cut both ways.

Shibboleth: Indeed, gerrymandering was the tactic used by Dr M when he was PM. Now he is hoisting his own petard.