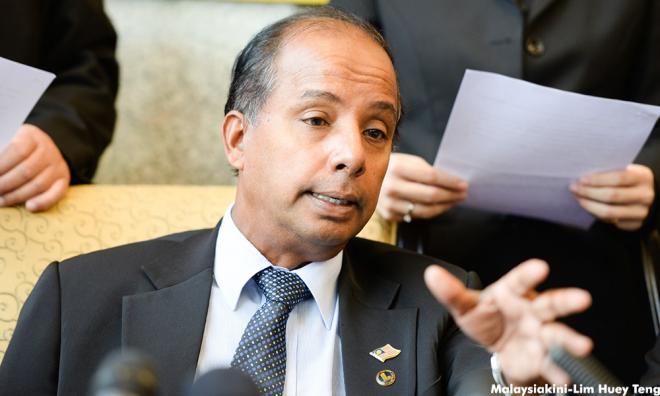 Why the gov't's reversal of LRA amendments does not hold water

MP SPEAKS | If Prime Minister Najib Abdul Razak can declare a public holiday shortly after the courts have declared that he is not a public official, what is the country in for?

It did not take long for the rakyat to find out where and what this anomaly can lead to.

When holding forth at the Transformasi Nasional (TN50) dialogue session over the long weekend, the PM implored women in the audience to vote for BN so that recovery of its two-thirds majority in Parliament will ensure constitutional changes enabling passage of amendments, known as 88A, to the Law Reform (Marriage and Divorce) Act 1976.

Last November, while gearing to make the promised changes to the Act, the government introduced 88A, which states, "Where a party to a marriage has converted to Islam, the religion of any child of the marriage shall remain as the religion of the parties to the marriage prior to the conversion, except where both parties to the marriage agree to a conversion of the child to Islam, subject always to the wishes of the child where he or she has attained the age of eighteen years."

The above proposal was unveiled in 2009 as a cabinet directive after the controversy flared in the public arena, following an estranged husband's conversion of three children, who were minors, to Islam.

This was the infamous Indira Gandhi case, where the three minor children of the kindergarten teacher were unilaterally converted to Islam by her estranged husband, without her say.

Four cabinet committees were tasked over the last eight years to see how the cabinet directive of 2009 would prevent this travesty of natural justice from repeating and being framed as law.

This task was accompanied by much hemming and hawing until the people were told, before the last parliamentary session, that the 88A proposal was to materialise in the overall amendments to the 1976 Act.

The omens were not good because of reported opposition from some MPs that 88A constituted a violation of the Federal Constitution.

In the event, 88A was withdrawn at the last minute when the 1976 Act came up for second reading in Parliament last month.

The government held that 88A was unconstitutional, as it apparently contravenes Article 12(4) of the Federal Constitution, that states "the religion of a person under the age of eighteen years shall be decided by his parent or guardian.”

This stance of government does not hold water for the following reasons:

2) The government is buckling to pressure from Islamists and PAS, the party Umno wants as an ally in the coming general election.

3) Umno wants to leverage the issue to gain support from Malay/Muslim voters.

5) And, in any case, if the 88A was adopted by Parliament, it would be overridden any administrative orders as were decisions of civil courts, including the ones from the Federal Court, as earlier demonstrated in the sorry saga of the case of the children of Indira Gandhi.

By withdrawing 88A, the BN government ignored the rights of minorities and allowed these to be superseded by the majority.

Finally, we in DAP, as the responsible opposition in Parliament, could have been approached by the government to support what would have been a superfluous constitutional amendment, in the event such an amendment was deemed to be necessary.

To overcome their lack of a two-thirds majority in Parliament, BN could have had the support of us in DAP, ever eager supporters of 88A.

Why was DAP, which has 36 parliamentary seats, not consulted to garner this support?

We were more than eager to see 88A go through the legislative process and would have been steadfast in supporting it unconditionally.

PM Najib should not pull wool over people's eyes.

We know anomalies abound under Umno-BN governance, but when accompanied by absurdities, such as them wanting a two-thirds majority to legislate what they promised to enact but then absconded from lack of political will, the people must draw the line against such duplicity, for it takes them to be stupid.

M KULASEGARAN is the MP for Ipoh Barat