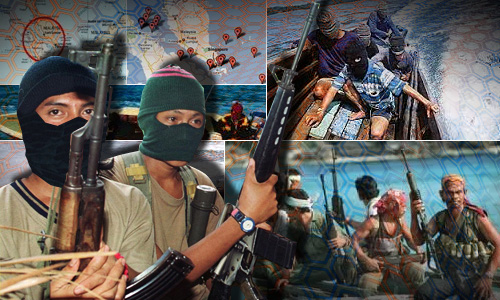 Authorities thwarted the hijacking of a Thai oil tanker today and arrested 10 suspected Indonesian pirates on board the ship, a maritime security agency commander said.

A special team from the Malaysian Maritime Enforcement Agency (MMEA) stormed the MT Tanker MGT1, off the coast of Terengganu, nearly 10 hours after it was reported missing on Wednesday.

While the 10 were detained on the tanker, three suspects on a smaller boat nearby managed to escape, and a MMEA vessel has been sent to find them, agency chief Admiral Zulkifli Abu Bakar said in a statement.

The boat was spotted near the tanker by a surveillance aircraft.

"Warning shots were fired from the aircraft when the boat tried to escape but the attempt to stop them failed as the aircraft was running low on fuel," Zulkifli said.

Zulkifli identified the 10 suspected pirates that were arrested as Indonesian nationals. None of the 14 crew members on the tanker - all Thais, was hurt.

The tanker, which was transporting 2.2 million litres of diesel valued at about RM7 million had been escorted to Kuala Terengganu to help with the investigations into the case.

Piracy in Southeast Asian waters, including its busy international shipping lanes, has been a problem for years.