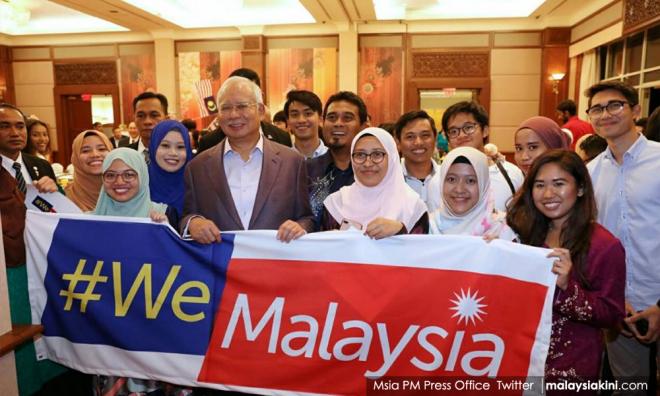 The invitation from United States President Donald Trump for a meeting at the White House is a form of acknowledgement of Malaysia’s status as a rising star, said Prime Minister Najib Abdul Razak.

According to the News Straits Times, Najib said the invitation not only recognises Malaysia's status as a "rising star" nation but also proved beyond doubt how critics fabricated allegations that it has become a failed state.

"We are not here to ask for money. We are here to present potential opportunities for both countries," he was quoted as saying during a meeting with Malaysian students and the diaspora at a dinner at the Malaysian Embassy in Washington DC yesterday.

Among potential opportunities, Najib said, included the partnership to wage a war against terrorism.

Najib and his wife Rosmah Mansor are in the US capital for a three-day working visit, focused on a meeting with Trump scheduled for today at the White House.

During the function, Bernama reported that the prime minister highlighted the current situation in Malaysia and extended his National Day and Malaysia Day greetings.

There are about 28,000 Malaysians living in cities throughout the US.

Najib disclosed to the gathering that his meeting with Trump would allow him to explain to the US that Malaysia was determined to become a developed country with lots of opportunities.

He said Malaysia would continue to support the global effort to fight terrorism and at the same time propagate the true image of Islam.