The religious school on Jalan Datuk Keramat, which was razed in a fire that killed 23 people early this morning, did not have the permission to operate the tahfiz at the premises it had been occupying.

Berita Harian Online quoted Federal Territories Minister Tengku Adnan Tengku Mansor as saying that checks with the Kuala Lumpur City Hall (DBKL) showed that the owner of the building and the operator of the Darul Quran Ittifaqiyah school did not have permission from both DBKL and the Fire and Rescue Department to operate the school there.

"There are times when we order such premises to be shut down, DBKL and I will be criticised and accused of being unfair. But it is because we don't want incidents like this to happen," Tengku Adnan told reporters after visiting ground zero.

He also pointed out that the tahfiz only had one entrance and exit. 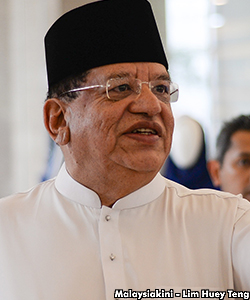 "We laud the tahfiz management, which offers free education to students from poor families, but safety aspects should be prioritised.

"Checks showed that this particular premise had breached security guidelines, as it only has one way in and out, which is dangerous in times of an emergency," he noted.

Tengku Adnan (photo) said he has instructed officers in his ministry, as well as in DBKL, to carry out urgent checks at all tahfiz centres in the city centre and Putrajaya, starting today.

The portal also reported that the razed building was just a temporary placement for its occupants, as the school's original building was under renovation.

It quoted school principal Mohd Zahid Mahmood as saying that the occupants were supposed to move back to the original building at the end of the month, after the completion of the year-long renovation of the premises.

School is registered with MAIWP

Mohd Zahid, who has been managing the Darul Quran Ittifaqiyah school for the last 15 years, said it is registered with the Federal Territory Islamic Religious Council (MAIWP).

According to him, the premises housed 42 students, six teachers and two wardens from all over the country, and all the facilities were provided for free – funded by sponsors, public contributions and MAIWP.

He said the majority of those who perished in the fire were the younger students of the school.

Mohd Zahid said the school had always prioritised safety measures and cooking was allowed only on the ground floor of the three-floor building – away from the boarding rooms on the upper floors.

The New Straits Times reported that such a high number of victims were killed because they could not escape, due to grilles on the windows, which could not be opened from the inside.

The Fire Department believes that either a short circuit or a lighted mosquito coil could have caused the blaze.

Fire Department deputy director-general Soiman Jahid said the school was also not equipped with any firefighting equipment, nor did it have a fire safety permit, only being in the process of applying for one. The school management, he added, would be summoned for a statement.

Selangor Menteri Besar Mohamed Azmin Ali told reporters at the scene that the state government was willing to offer assistance to the victims' families.

This would be in the form of hearses to ferry the victims' remains to their hometowns, as well as counselling sessions for the families of the deceased.

The blaze, which started about 5.10am today, completely gutted the upper floors of the school building. The dead were 21 students and two wardens. At least 11 others were injured and are being treated at the Kuala Lumpur Hospital.