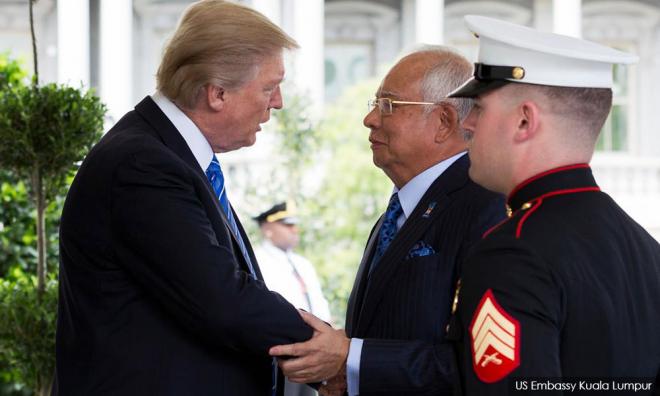 Prime Minister Najib Abdul Razak said US President Donald Trump was so honoured to host the Malaysian delegation at the White House on Tuesday that the latter personally saw them off.

Recalling the end of his meeting at the White House Cabinet Room, Najib said one of Trump's aides had wanted to arrange a handshake photo-op outside the president's office.

"The officer then said, 'But sir, the car is right down at the basement.'

"What did Trump say? He said 'never mind, he is my friend'," Najib told some 1,000 supporters at the Bunga Raya Complex, next to KLIA, tonight.

He said this was a sign of respect, even though his critics mocked his US visit.

Najib visited Trump on Tuesday, on invitation of the White House.

Unlike Trump's meetings with other heads of governments, there was no handshake photo-op with Najib before news agencies in the Oval Office.

The only images of Najib in the US president's office appear to be from the official White House media team.

Likewise, the duo also opted not to have a customary joint press conference at either the East Room or the Rose Garden, which is the norm for leaders visiting the US president at the White House.

Instead, a joint press statement was issued after their meeting in the Cabinet Room, and journalists were not allowed to ask questions.

It is believed that the lack of media access was to prevent uncomfortable questions about the US Department of Justice's investigations into the 1MDB scandal.