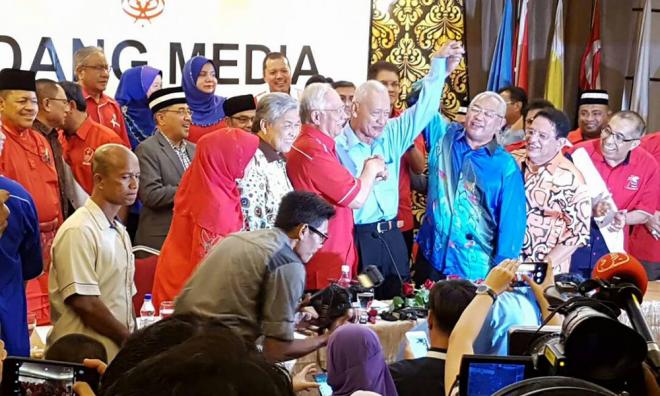 Pakatan Harapan leaders, who were bracing for a possible bombshell, took to social media to laugh off the anti-climatic outcome.

Prior to the announcement, there had been various speculations, including the return of Shafie Apdal to Umno, which was denied by Parti Warisan Sabah leaders.

Mahathir mocked Mat Taib's re-entry into Umno and raised his arrest in Australia in 1997 for attempting to get through the Immigration with around US$1 million in Malaysian, Singaporean and New Zealand notes, an offence for which he was charged but acquitted.

Najib said he was warmly welcomed by world leaders as Malaysia is a highly regarded country.

DAP's Kluang MP Liew Ching Tong criticised Najib's announced investments in the US, likening it as a tribute from a vassal state.

Responding to several criticisms, including allegedly allowing the country to come under the influence of China, Foreign Minister Anifah Aman stressed that Malaysia's foreign policy is clear and consistent.

Liew said Najib's speech at an MCA event that Chinese Malaysians will be first to be targeted if there was no peace in the country was a perceived threat to the community.

However, MCA secretary-general Ong Ka Chuan said the prime minister's speech was taken out of context.

Mahathir, in an interview with Malaysiakini, said Harapan will protect Malay rights but not at the expense of non-Malays.

Najib gave his assurance that the rights of Sabah and Sarawak will be preserved in the Malaysian Federation.

Three men were arrested in Kulim, Kedah for allegedly rioting.

Deputy Prime Minister Ahmad Zahid Hamidi will be officiating a conference on occupational safety in Putrajaya.

The Royal Commission of Inquiry into the forex scandal will resume with Mahathir possibly taking the witness stand.