MP SPEAKS | In this concluding part on my article “Battle for Selangor” in GE14, I analyse the projected outcomes for the state seats in Selangor under three possible scenarios which are summarised in Table 1 below. 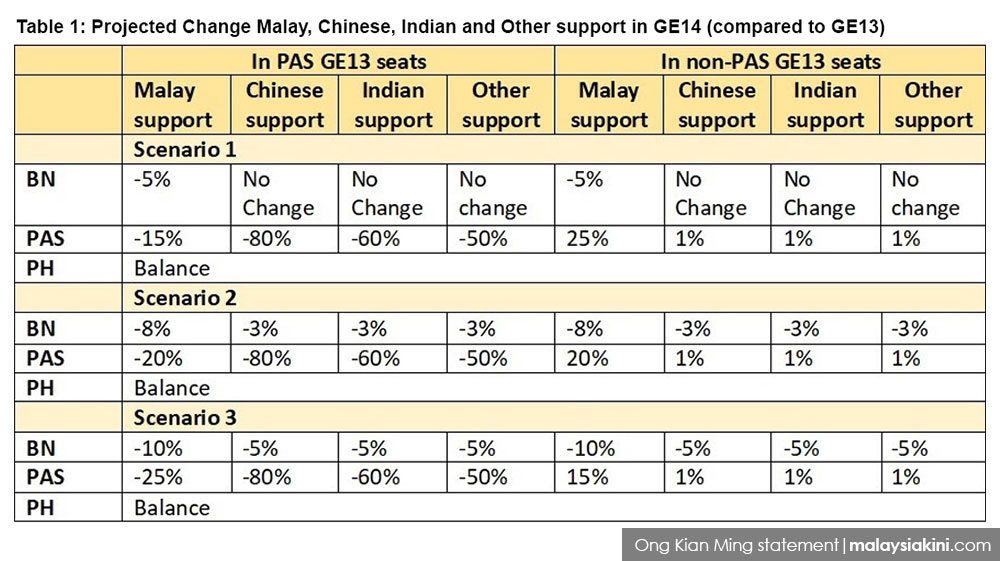 I assume that PAS (and its coalition partners) will contest in ALL 56 state seats in Selangor. In the seats which PAS contested in for GE13, I project that the level of Malay support for PAS will drop by 15%, 20% and 25% respectively in GE14.

This means that if PAS obtained 40% of the Malay vote in GE13, its share of Malay support would drop by 25%, 20% and 15% respectively under Scenarios 1, 2 and 3. I also project that PAS’ non-Malay support will take a tremendous dive – by 80% among Chinese voters, by 60% among Indian voters and by 50% among Other voters.

Are these realistic projections? Keep in mind that PAS’ Malay support in the Sungai Besar by-election dropped by 10% from 40% to 30%. Given the inclusion of Bersatu in Pakatan Harapan (Harapan), the strengthening of the Harapan leadership and the breaking off of ties between PAS and PKR, it is not unrealistic to speculate that Malay support for PAS would drop further in GE14. And in the case of a Malay tsunami, which is what is projected in Scenario 3, it is not unrealistic to see many PAS and even Umno supporters throwing their support behind Harapan in GE14.

The non-Malay support for PAS in the Sungai Besar by-election was negligible. There is nothing that PAS has done since this by-election that can convince non-Malay voters to keep supporting PAS in GE14.

There are many indications that overall Malay support for the BN would fall in GE14. The impact of the Goods and Services Tax (GST) and the increase in the cost of living have been felt by rural and urban voters. Support for Prime Minister Najib Razak among the Malays is far lower than what it was in GE13. Bersatu, led by former premier Dr Mahathir Mohamad and former deputy prime minister Muhyiddin Yassin, have allowed Harapan to venture into Umno strongholds that were previously closed to the opposition coalition.

What are the projected outcomes under Scenarios 1, 2 and 3? The results are summarised in Table 2 below.

In Scenario 1, Harapan is projected to win 35 out of 56 state seats. Even though this is less than the 44 state seats the former coalition Pakatan Rakyat won in GE13, it is still sufficient for Harapan to form the next state government in Selangor.

In Scenario 2, which is a mini-Malay tsunami, Harapan is projected to in 43 state seats, one seat short of what Pakatan achieved in GE13.

In Scenario 3, which is the full Malay tsunami scenario, Harapan is projected to win 50 state seats.

I want to highlight three points from this analysis.

Firstly, the projections clearly show that PAS cannot prevent Harapan from forming the next government in Selangor, even under the most pessimistic scenario (from Harapan’s perspective), which is Scenario 1.

Thirdly, Harapan is in the best position to capture the political dividends in the event of a Malay tsunami. Harapan can campaign credibly to change the policies of the federal government that are unpopular with the rakyat.

PAS cannot even say that it will be the kingmaker in Selangor, because it is not likely to win even the single seat. With a strategic campaign, Harapan can reap the benefits of a possible Scenario 3 by winning more state seats than even the 2013 general elections in GE14.

Part 1: The battle for Selangor in GE14

Part 2: How Harapan can win in Selangor sans PAS

ONG KIAN MING is DAP Serdang MP and head of the Penang Institute in Kuala Lumpur.