MP SPEAKS | There are some who would bestow the title “Father of public transport modernisation” to Prime Minister Najib Abdul Razak because of the billions of ringgit poured into the BRT line in Sunway, the LRT extension, the new MRT line and the KTM Komuter Klang Valley Double Track (KVDT) upgrade.

But the reality is that despite the billions of ringgit poured into these large public transportation rail projects, the overall ridership for the LRT, KL Monorail and KTM Komuter has not increased significantly over the past two years.

As the figures below will show, Najib’s administration should be ashamed that it has spent so much money on these projects with so little apparent benefit to the rakyat.

Figure 1 above shows the average daily ridership figures for the Kelana Jaya LRT line, the Ampang LRT line, the KL Monorail and the KTM Komuter on a quarterly basis from Q1 2014 to Q2 2017.

The RM634 million Sunway BRT was launched in June 2015. The daily ridership figures were 11,295 and 12,372 in June and July 2015 respectively, when the service was still free. The ridership figure then plunged to 4,616 in August 2015 when fares were introduced, which cost, on average, RM1 per kilometre for a 5.4km BRT route. The high fares charged were even critiqued by the Sunway chairperson Jeffrey Cheah.

Figure 2 above shows the daily ridership of the KLIA Transit, the KLIA Ekspres and Phase 1 of the MRT-SBK Line 1 which was opened in December 2016. 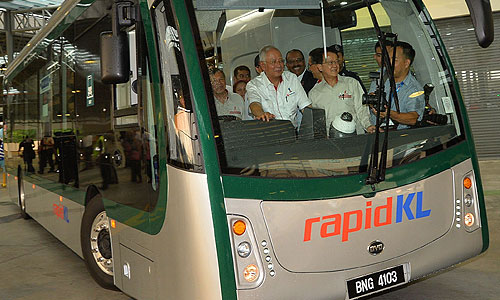 What explains the decrease in overall ridership despite the opening of the Sunway BRT (photo), the LRT extension and the MRT Line 1?

One of the main explanations is that the cost of taking these trains is not necessarily cheaper than driving.

For example, as a letter from a reader published in a newspaper claimed, it costs him RM9 for a trip from Puchong to Sunway via the Sunway BRT, or RM18 for a return trip. Throw in the parking at the LRT station (RM4) and fuel costs, and it is estimated that it would cost him RM25 per day to take the LRT, compared to an RM10 drive (including toll costs and free parking at his office).

When the Q3 2017 daily ridership figures are released later this year, I expect there to be a significant increase in the passenger numbers for the LRT and MRT because of the half-price offer during the SEA Games leading up to Merdeka, and also the opening of the full MRT Line 1 from Sungai Buloh all the way to Kajang.

But we should take these ridership figures with a pinch of salt. A more realistic gauge of daily ridership would be the Q4 2017 figures, when the half-price discounts have been taken away, and the people can more accurately estimate if it is worthwhile for them to take public rail transportation instead of using their own vehicles.

As we have seen in the examples above, ridership figures decrease significantly once the “free” or discounted periods are over.

The other reasons why members of the public are reluctant to use public rail transport have to do with timing and reliability. For example, it takes someone approximately 30 minutes to drive from Puchong to Sunway, but it would take about an hour for the same trip using the LRT and the BRT.

Issues of reliability continue to plague the KTM Komuter, despite the RM1.4 billion allocated for the KVDT upgrade project. Derailment and delays decrease the reliability of the KTM Komuter, which also discourages potential passengers from abandoning their cars in favour of rail transportation.

It is all fine and good when the prime minister, together with his cabinet ministers and other VIPs, take the BRT, the LRT and the MRT with great fanfare and publicity upon launching. But after the VIPs are gone, and after the discounted fare periods have expired, we do not see passengers voting with their feet by switching to public rail transport.

To really be a game changer, Najib must make public rail transportation affordable (for example, by introducing a monthly train and bus pass for, let’s say, RM100), reliable (avoid delays and disruptions) and accessible (solving the last mile connectivity problem).

Najib will only deserve the title of “Father of public transport modernisation” if, and only if, these issues are resolved. After all, spending money on these projects is the easy part. Getting people on the trains and buses is something else altogether.

ONG KIAN MING is Serdang MP and head of the Penang Institute in Kuala Lumpur.