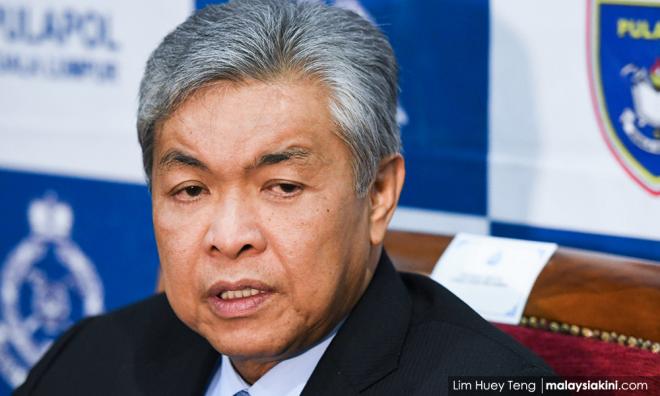 Deputy Prime Minister Ahmad Zahid Hamidi today said the ban on the book written by Turkish journalist Mustafa Akyol was imposed because the book was found to contain an ideology which contravened the norms of Malaysian society.

Ahmad Zahid, who is also Home Minister, said the book titled “Islam Without Extremes: A Muslim Case for Liberty” which was translated into the Malay language as Islam Tanpa Keekstreman: Berhujah Untuk Kebebasan was found to contain factual contradictions and could be detrimental to national security if widely distributed.

He said the ban on the book was done after taking into consideration several factors.

“Firstly, there was numerous feedback from readers saying that the book was inappropriate. Secondly, the content of the book was reviewed based on the permit issued by the ministry or ISBN, and thirdly, of course, we have carried out our own investigation on the suitability of the book.”

He said this to reporters after opening the 10th Asean Ministers Meeting on Rural Development and Poverty Eradication (AMRDPE) in Kuala Lumpur today.

The ban on Akyol’s book was gazetted on Sept 28, a day after the writer was detained at the KL International Airport while waiting for his flight to the United States.

Akyol was reported to have come to Malaysia at the invitation of the Islamic Renaissance Front to present a talk titled “The Islamic Jesus: The Commonalities Between Judaism, Christianity and Islam” at Nottingham University Malaysia, but the event was cancelled after he was summoned by the Federal Territory Islamic Religious Department.

In another development, Ahmad Zahid repeated the stand that Malaysia had no plans to ratify the United Nations Convention on the Status of Refugees to protect the rights of the Rohingya refugees in the country.

However, he said Malaysia would continue collaborating with the UN High Commissioner for Refugees and the International Organisation for Migrants, to tackle the issue.