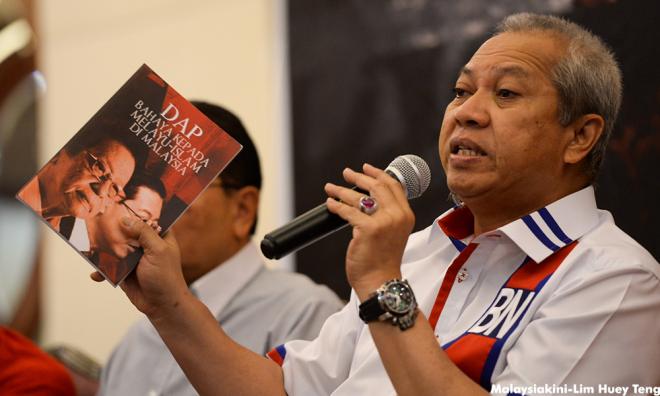 'What did Annuar Musa have to do to remain Umno info chief?'

MP SPEAKS | Umno information chief Annuar Musa claimed that I had “brought to heel a formidable politician” like Dr Mahathir Mohamad, alleging that the former prime minister and Umno president, “who appeared invincible in the world of politics,” had succumbed to my “sweet words.”

But before I respond to Annuar’s latest fulminations, let me ask him five questions which I hope he will respond to promptly without any hesitation.

First, how many cases of corruption and abuse of power in his capacity as Mara chairperson (and other portfolios) have been investigated by MACC, and what are the outcome of these investigations?

Second, does Prime Minister Najib Abdul Razak have to give the green light before the MACC can arrest and prosecute Annuar for corruption as Mara chairperson?

Third, Annuar was suspended as chairs of both Mara and Pelaburan Mara Bhd (PMB) at an emergency board meeting on Jan 31, 2017, when he was visiting New Zealand as Mara chair.

Why did he submit to such shabby indignity, and what did he do in the ensuing six months to establish his innocence and honesty, as well as the injustice of his suspension?

Fourth, Annuar said in early August that he had no plan to continue being the Mara chairperson after holding the post for four years (omitting the fact that he was suspended for more than six months at the end of his appointment) and that he had personally sent a letter to the prime minister about it.

Why did he take the stand that he did not want to be reappointed as chairperson when he was not withdrawing from public life, given that he continued to be very active as Umno information chief?

Fifth, was his nationwide roadshow to attack and demonise DAP and Pakatan Harapan leaders one of the terms of agreement between him and the prime minister, so that he could relinquish the post of Mara chairperson but continue as Umno information chief?