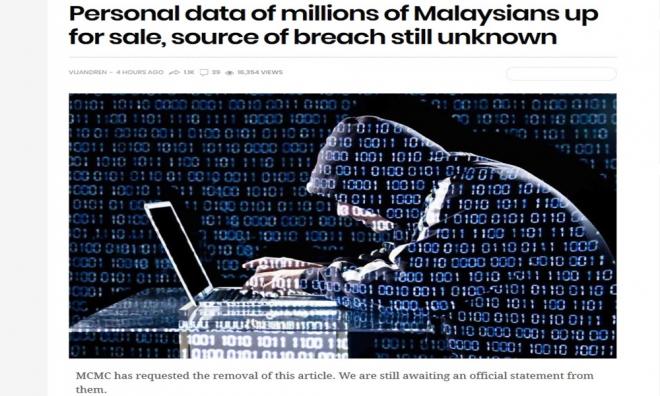 The Malaysian Communications and Multimedia Commission (MCMC) has ordered Lowyat.net to remove a report of what the technology portal claimed was one of the country's biggest data breaches in history.

Around two hours after the report titled "Personal data of millions of Malaysians up for sale, sources of breach still unknown" was uploaded this evening, Lowyat.net removed the story.

It was replaced with the message stating: "MCMC has requested the removal of this article. We are still awaiting an official statement from them".

Lowyat.net, in its initial report, said it received a tip-off that someone was selling huge databases of personal details belonging Malaysians.

The portal said it was initially sceptical and thought the attempted sale was a scam but discovered, upon investigation, it could be "one of the biggest data breaches ever in Malaysian history".

Among the data on sale was 50 million entries of data from various telcos.

It added the data breach was believed to have occurred between 2012-2015.

Other data on sale were 17 million rows of customer information from a jobs portal.

It added this particular set of data was likely to have been obtained between 2012 to 2013.

Apart from these, there were also two sets of 20,000 and 62,000 data of doctors respectively, obtained from medical associations and 720,000 entries of housing loan applications.

Malaysiakini has contacted the MCMC for comment and is awaiting a response.