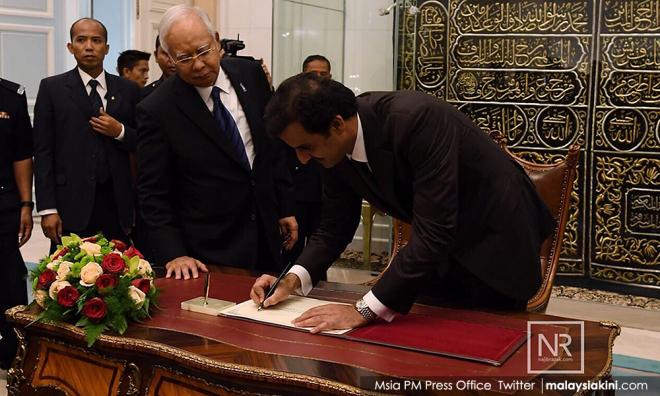 Minister: Arab quartet has no issue with Qatar emir's visit

PARLIAMENT | Malaysia received no negative response from the Arab quartet, namely Saudi Arabia, United Arab Emirates, Bahrain and Egypt, over the visit of the Emir of Qatar Sheikh Tamim Hamad Al Thani to Malaysia on Oct 15.

Defence Minister and Minister with Special Functions Hishammuddin Hussein said the Malaysian embassies also reported no negative reports on the visit by the media in these four countries.

He said the current conflict between Qatar and other Arab countries did not threaten the good diplomatic relations between Malaysia and these countries.

"The government always hopes for an immediate solution to the conflict among the Gulf states and also supports any peace effort to resolve the conflict," he said at the Dewan Rakyat sitting, here, today.

He was replying to a question from Ahmad Nazlan Idris (BN-Jerantut) on the effects of the emir’s visit on bilateral relations between Malaysia and the Arab quartet.

Hishammuddin said the emir’s visit to Malaysia had a positive impact on the economic and trade ties between the two countries, besides the four memorandums of understanding signed.

He said the MoU’s were in the fields of diplomatic training, higher education, law and judiciary, as well as on the proposed setting up of the Malaysia-Qatar Joint Business Council.

To a supplementary question from Hasan Arifin (BN-Rompin) on the role of the Organisation of Islamic Cooperation which is still unclear in resolving the Qatar-Arab quartet conflict, Hishammuddin said the OIC’s role was still relevant in resolving the crisis.

"We have no objection if the OIC continues to assist but the more concrete effort made by Kuwait as the go-between has been acknowledged by the OIC.

“So, if it has received the support and endorsement of OIC, I believe our aim and hopes of stronger unity among the Islamic countries can be achieved,” he said.