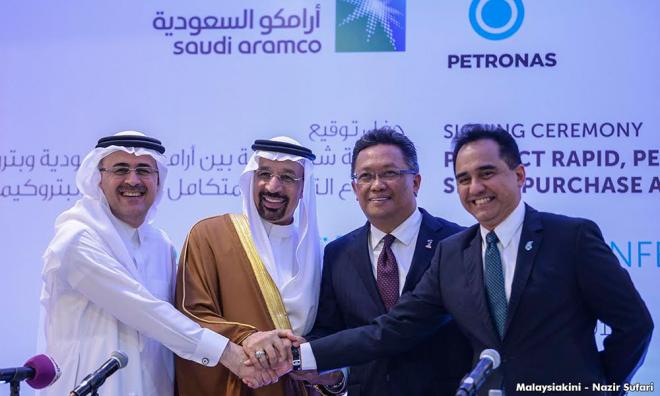 Minister in the Prime Minister’s Department, Abdul Rahman Dahlan said the government was giving both Petronas and Saudi Aramco an opportunity to resolve several technical issues regarding the investment deal.

“There are several terms and conditions that the parties have to meet and it is an ongoing process.

“I expect that it would not be long before they (Saudi Aramco) begin channelling their funds for the Rapid project,” he told Bernama in a recent interview.

Rahman was in Bangkok to attend the 7th Asian Ministerial Energy Roundtable which ended yesterday.

“We discussed the latest developments with regards to Saudi Aramco’s investment in Rapid. I find that there are no major issues to deal with, so it should be happening soon,” he said.

In February this year, Petronas and Saudi Aramco signed a share purchase agreement, which enabled the Saudi Arabian oil and gas company to purchase a 50 percent stake in the Rapid project.

The agreement saw both parties having an equal equity stake in selected ventures and assets of the venture.

The deal was made during Saudi Arabian Ruler, Raja Salman bin Abdulaziz Al-Saud’s visit to Malaysia.

According to Rahman, if the deal goes smoothly and becomes profitable, there was a chance that Saudi Aramco would increase its investments in Malaysia.

Malaysia’s strategic location in the Southeast Asian region has attracted interest, not only from Saudi Aramco, but also other global oil and gas companies, he said.

Asked to comment on whether the stronger bilateral ties between Malaysia and Saudi Arabia might lead to Petronas or Khazanah Nasional becoming an investor in Saudi Aramco’s public listing proposal, he said it was unlikely.

“I don’t think there are any special talks on Petronas or Khazanah Nasional becoming a cornerstone investor in Saudi Aramco’s initial public offering (IPO),” he said, but noted, that the companies may purchase the shares, once listed.

The plan to list five percent of Saudi Aramco’s shares next year, valued at US$100 billion, would make it the world’s biggest IPO listing, and put the company’s value at US$2 trillion.

Rahman said although Bursa Malaysia was initially considered as one of the bourses to be involved in Saudi Aramco’s IPO listing, the plan did not materialise, as the company targeted the London Stock Exchange and New York Stock Exchange instead.

However, he did not rule out the possibility of Bursa Malaysia becoming involved should Saudi Aramco choose to list its subsidiaries in the future.