Prince of Wales, Prince Charles, and wife, Duchess of Cornwall, Camilla Parker-Bowles arrived in George Town tonight as part of a day-long official visit to commemorate the 60th anniversary of bilateral relations between Malaysia and the United Kingdom.

The heir to the British throne and his spouse flew in a Royal Air Force aircraft at the Penang International Airport at 8.10pm.

The royal couple was accompanied by Minister-in-Attendance SK Devamany, who is also deputy minister in the Prime Minister’s Department.

Upon arrival, the royal entourage was greeted by Penang Chief Minister Lim Guan Eng and the full line-up of state executive councillors. 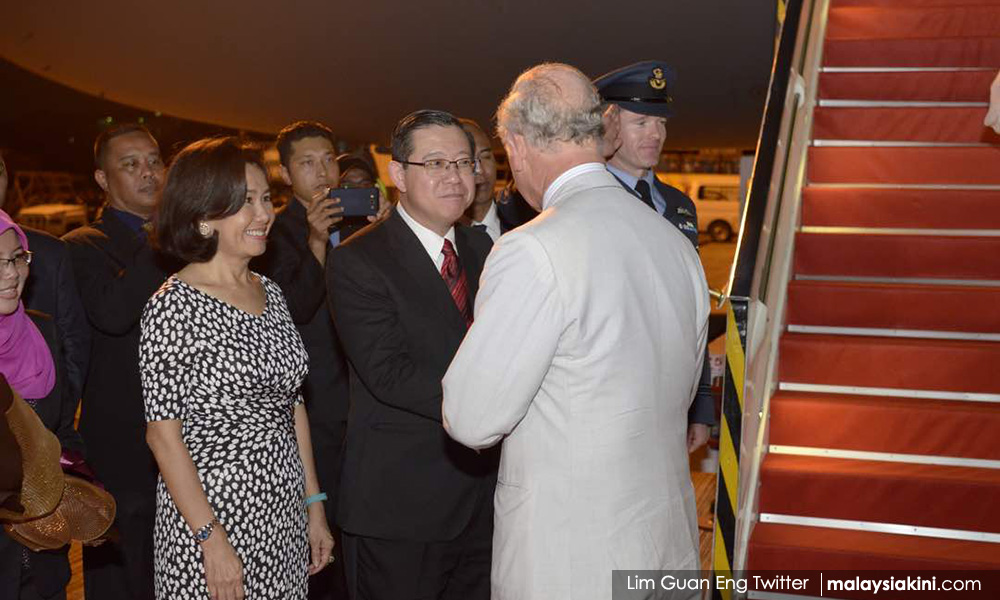 Their Royal Highnesses are scheduled to visit a number of places of worships in the heritage enclave here tomorrow, including the St George Church, Kapitan Keling Mosque, Han Jiang Ancestral Temple and Sri Mahamariamman Temple.

They are also expected to stroll around the heritage areas at noon before Prince Charles visits the Sun-Yat Sen Museum in Armenian Street while Camilla heads to the Teochew Puppet and Opera House on the same street to enjoy a cultural show.

While the Duchess takes a rest in the afternoon, the Prince of Wales will visit the World Fish Centre, an international research organisation that harnesses fisheries and aquaculture to reduce hunger and poverty based in Batu Maung, the southern part of the Penang Island.

Following the visit to the fish centre, the Prince will proceed to the Royal Malaysian Air Force in Butterworth, Seberang Perai in Peninsular Malaysia or previously known as Province Wellesley, for Five Power Defence Arrangements.

At night, the British royals will attend the Sandhurst Alumni Reception at Eastern and Oriental Hotel before they conclude their visit in Penang, by attending the Penang Peranakan Museum Reception in Church Street.

This is the royal couple’s maiden visit to Malaysia.

Previous visits by the British royalty here were by Her Majesty, Queen Elizabeth II and the Duke of Edinburgh who attended the official opening of the 16th Commonwealth Games in Kuala Lumpur in 1998, and the visit by Prince William and Kate Middleton, the Duke and Duchess of Cambridge, in September 2012.

Malaysia is the UK’s second largest export market in Asean and the UK is Malaysia's third trading partner in Europe, while in the field of education, there are currently more than 18,000 Malaysians studying in the UK.

Prior to their visit to Penang, Prince Charles and the Duchess of Cornwall visited Kuching where they were presented with colourful Sarawak cultural performances.