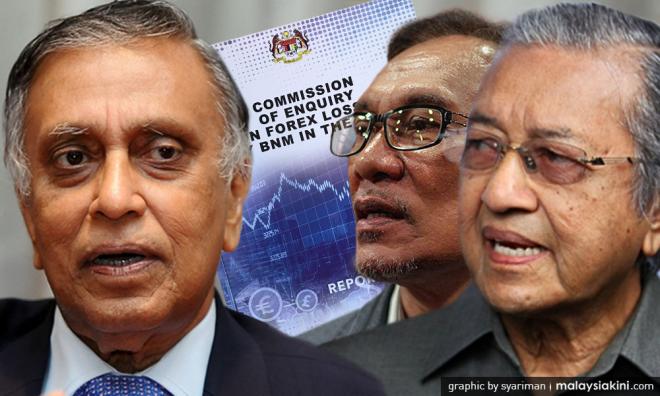 The RCI also established that Nor Mohamed Yakcop, who was part of Bank Negara’s management at the time, was the person in charge of the forex dealing operations.

The commission is also of the opinion that this incident involved a criminal breach of trust under Sections 406 and 409 of the Penal Code.

Nor Mohamed was in charge of portfolios at Bank Negara between 1986 and 1993, including managing external reserves and regulation of domestic financial markets.

However, the RCI said, other parties had to share the blame as well.

“Although he had dominion over BNM’s funds and seemed to have had a free hand in forex dealings, he could not have carried on for such a long time without the direct or tacit approval of his superiors and/or other persons in authority.

“Therefore, the commission assessed the joint liability of these persons, which could fall either under Section 34 or Section 107 of the Penal Code and explained as having the common intention or abetting,” the commission adds in its report, which was released today.

These individuals, according to the RCI, are then Bank Negara governor Jaafar Hussein, his deputy Lin See Yan, Bank Negara's board of directors, then finance minister Anwar Ibrahim and then prime minister Dr Mahathir Mohamad...