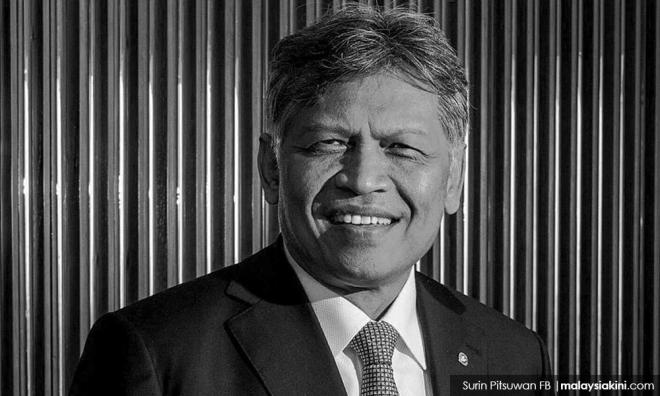 The well-known 68-year-old Thai politician collapsed while preparing to attend the Thailand Halal Assembly 2017 near here and was brought to the Ramkhamhaeng Hospital where he was pronounced dead at about 3pm (4pm in Malaysia).

"He suddenly collapsed in his residence in Ramkhamhaeng at about 2 pm (3 pm in Malaysia) and was immediately brought to Ramkhamhaeng Hospital where he was pronounced dead not long after admission," one of his assistants and a Democrat Party leader told Bernama.

He is survived by his wife, Alisa, and three children.

Surin, a Muslim, was born on Oct 28, 1949, in Muang district, Nakhon Si Thammarat, in southern Thailand and graduated from Claremont College in California in political science in 1972 and earned a Master's degree from Harvard University.

He joined politics in 1986 as a candidate of the Democrat Party and won a seat in his hometown of Nakhon Si Thammarat in all elections from 1986 to 2005.

Earlier this year, there were rumours that Surin was contemplating to stand as a candidate in an election for the post of Bangkok governor should the election be allowed.

Meanwhile, his assistant also told Bernama that Surin’s body had been released to his family by the hospital and sent to his house in Tha It in Nonthaburi, near Bangkok.

Surin's remains, according to him, would be flown to his hometown in Nakhon Si Thammarat either tonight or early tomorrow morning for burial after the Friday prayers.

Two weeks ago, Surin participated in a forum organised by a leading English daily in Bangkok. He had on numerous occasions travelled to Malaysia to attend various functions and speaking sessions.

Thailand's Foreign Ministry, in a statement following Surin's passing, said, it deeply regretted the death of the former foreign minister and Asean secretary-general and expressed its most sincere condolences to his family.

Surin, according to the ministry, played a key role in the conduct of Thailand's foreign policy.

"He contributed greatly to the advancement and interests of Asean, as well as the promotion of Asean on the international stage. His outstanding personality, knowledge and wisdom were truly recognised by global leaders," said the ministry.

Asean, on its official Facebook page, posted that the 10-member grouping was deeply saddened to learn of the death of its former secretary-general.

"It is a big loss to Thailand and the Asean community. We convey our sincere condolences to his family," it said.