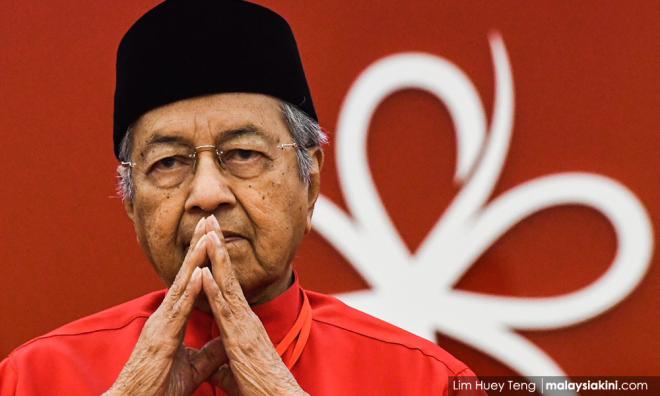 Dr M chides muftis as kafirs for not joining PAS, pins Memali on them

Bersatu chariperson Dr Mahathir Mohamad has taken a jab at the country's muftis who are also the advisors to the Malay rulers, saying they can be considered as kafirs (infidels).

This is because the muftis did not join PAS, he said, referring to the infamous amanat (speech) by PAS president Abdul Hadi Awang in 1981, Mahathir said.

The former premier, in his closing speech at the Bersatu general assembly today, also blamed the muftis for the bloody Memali incident, which some claim were fanned by Hadi's speech.

"I am fascinated by a speech by (the delegate from) Kelantan, now he knows that PAS profits on religions, and is not an Islamic party, but a party that takes advantage of Islam.

"I want to ask, to the muftis who are the advisors to our sultans, when PAS claimed that those who did not join PAS are kafir, why didn't the mufti's correct their (PAS') remarks?

"Their silence speaks a thousand words, as though they agree with PAS view.

"So if they agree with PAS' opinion, (but) they did not join PAS, then the muftis are also kafits, and those they advise are also kafirs," Mahathir said...