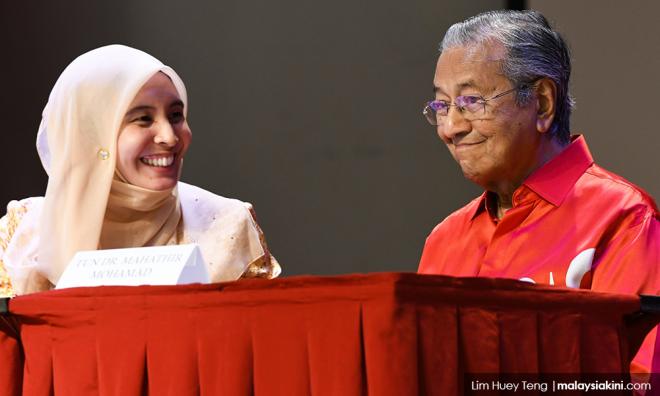 PKR vice-president Nurul Izzah Anwar has accepted former premier Dr Mahathir Mohamad's apology today for any mistakes he may have made during his time in office.

The next step she said, was to oust Prime Minister Najib Abdul Razak as Malaysia's "last dictator".

"I accept the apology, as well as Mahathir's involvement in efforts to save the future of Malaysia," Nurul Izzah said in a Facebook posting tonight.

Mahathir had made the apology at the end of his opening speech at the first Bersatu annual general meeting in Shah Alam earlier today.

Hours later at a press conference after the AGM ended, Mahathir said his apology was only "customary" when asked why he had apologised.

Nurul Izzah said Mahathir's apology in the afternoon had helped create progressive trust and took into account the concerns and interests of many.

"Only Allah knows what is in the hearts of each person, and we should surrender any judgement to God," she added.

Moving forward, the Lembah Pantai MP said there needs to institutional reforms, to put an end to dictatorships.

GE14 is expected to be one of the most hotly contested elections in Malaysian history, with Umno facing an opposition led by Mahathir, the party's own former strongman.

BN, which lost the popular vote in the last election, would be looking to prove itself by regaining a two-thirds majority in Parliament, which the ruling coalition was denied for two consecutive terms.

With 2017 coming to a close, there is only space for the next general election to be held next year.

The current parliamentary term expires on June 26, 2018 which means GE14 must be called within 60 days from that date.