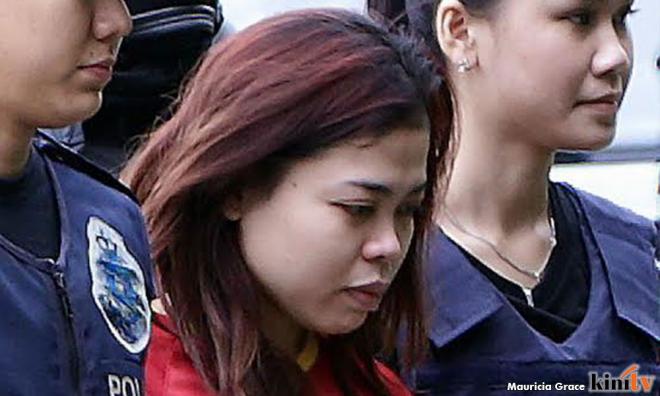 A closed-circuit television camera (CCTV) recording of one of the alleged murderers of Kim Jong-nam, was replayed in the High Court in Shah Alam today.

The CCTV footage screened for just a few seconds showed Siti Aisyah, 26, seated at Restoran Bibik Heritage at KLIA2 in handcuffs and under escort by a few policewomen.

However, Siti Aisyah’s counsel Gooi Soon Seng objected to the prosecution’s move, arguing that the defence had earlier been informed that the recording would not be used as evidence as it was made after the two accused had been arrested.

DPP Wan Shaharuddin Wan Ladin countered that the witness must be asked about the recording as he was the person who had prepared it for the investigating officer, ASP Wan Azirul Nizam Che Wan Aziz.

"We can play the recording and make a decision later whether it can be accepted or not,” he said.

But Gooi stressed that if the prosecution wanted to replay the whole recording, he would apply for a trial within a trial on the admissibility of the exhibit.

Justice Azmi Ariffin sustained the objection and ruled that the recording would not be played or admitted as evidence.

Meanwhile, DPP Muhamad Iskandar Ahmad told the court that there were only five prosecution witnesses left to be called in the trial involving Indonesian Siti Aisyah, 26, and Vietnamese Doan Thi Huong, 29.

The duo allegedly murdered Jong-nam, the brother of North Korean leader Kim Jong-un, with four others still at large at Sepang KLIA2 departure hall at 9am on Feb 13, 2017. They face the mandatory death sentence if convicted, under Section 302 of the Penal Code.

The prosecution has called 28 witnesses since the commencement on Oct 2, 2017 of the trial, which continues tomorrow.