ADUN SPEAKS | Recently, Dr Mahathir Mohamad’s comments on young graduates selling nasi lemak and driving Uber have invited negative criticisms from a number of politicians from the BN, including Youth and Sports Minister Khairy Jamaluddin, who should have understood the economic situation of Malaysian youth better.

Of course, young graduates can choose to sell nasi lemak and drive Uber. But the question that we need to ask is whether selling nasi lemak and driving for Uber are indeed their interests and dreams, or were they forced to do this because they could not get other decent-salaried jobs in the fields they were trained in?

Youth unemployment rate is three times higher than the national average unemployment rate – 10 in 100 youths are unemployed compared to three in 100 workers of all ages. While the World Bank reported that Malaysian employers are struggling to source talent, one in four graduates has remained jobless six months after graduation.

This implies that our tertiary institutions are not producing the workforce that is needed by the market. There is a mismatch between the supply and demand of the workforce. That is the first structural problem.

Growing up, we are told that a university degree is the ticket to a successful life, or at least a better life than our parents. It doesn’t apply anymore today. Many of our young people today, even with university degrees, are not earning enough to cope with the rising cost of living.

Starting salaries have not increased much for more than a decade. As a matter of fact, about 45 percent of our university graduates earn below RM1,500 a month, as of 2013. And as of 2015, 54 percent of fresh graduates earned less than RM2,000.

The stagnant salaries phenomenon did not come from nowhere, for it is the manifestation of the failure of the government of the day to create decent-paying jobs. The graph below shows the employment share of different categories of jobs in Malaysia since from 2001 to 2015.

The percentage of total employment by skill levels for low-, mid- and high-skills were 10.6 percent, 65 percent and 24.3 percent respectively in 2001 and 13.8 percent, 60.7 percent and 25.5 percent respectively in 2015. It shows clearly that our economy has created low-skill jobs at a faster rate than high-skill jobs and we are facing a hollowing of mid-skill jobs. Since many of the low-skill jobs are taken up by foreign workers, so we can say that our economy now works better for the foreign workers than our young graduates! 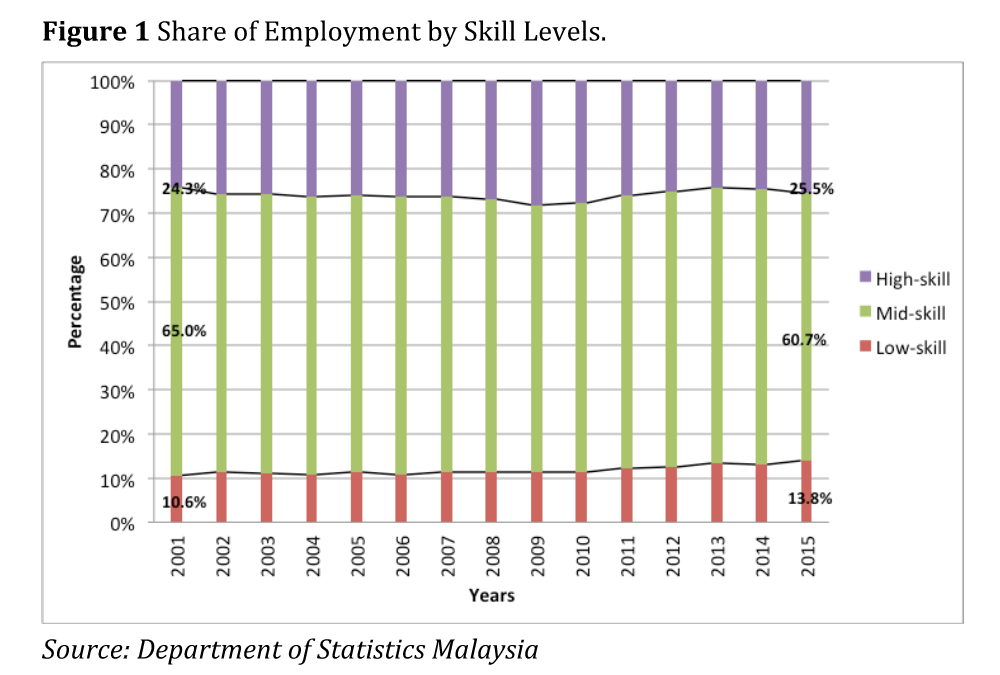 We have always heard that Prime Minister Najib Abdul Razak’s government wants to transform the economy with fancy programmes and announcements, but the job data has shown clearly that those initiatives have failed to make a significant impact on the job landscape in Malaysia. 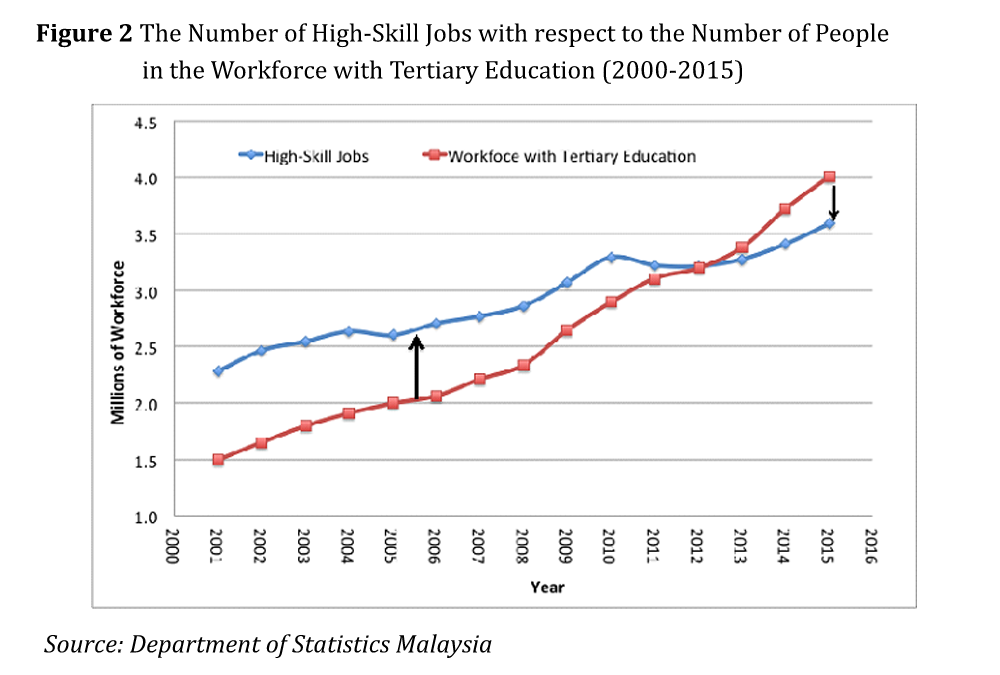 Here is how the chart translates into reality. The previous generation of the young workforce could get jobs that allowed them to “move up” compared to their education levels (there were more high-skill jobs than people with a tertiary education) whereas this generation of the young workforce is faced with difficulties in finding jobs that match their qualifications and aspirations. Some may need to work in jobs that are a “step down” (as we now have a workforce with tertiary education that is more than total high-skill jobs).

As a result, many young graduates today are in jobs that don’t match their qualifications and aspirations and being paid as such. This situation is generally known as underemployment and it is the second structural problem that we need to urgently fix.

Underemployment has negative implications for the country as the return on education is diminished. The country is spending its limited resources on funding tertiary education institutions only for graduates to come out to work for very low salaries. At the individual level, underemployment prevents an individual from necessary career development, which in turn enables them to find better jobs in the future.

Overall, while I believe that individual hard work and initiative will determine one’s income level, there are systemic and structural flaws that the government needs to correct – the mismatch of supply and demand of workforce as well as the types of jobs our economy produces. These two structural problems resulted in the double whammy of unemployment and underemployment faced by Malaysian youths today.

Khairy and the politicians from the BN should not to hide their heads in the sand and pretend that everything is well and fine while our young people are losing opportunities to fulfil their aspirations through having better and decent-paying jobs.

Tomorrow: Steps the government should take to create more good jobs for the youths.