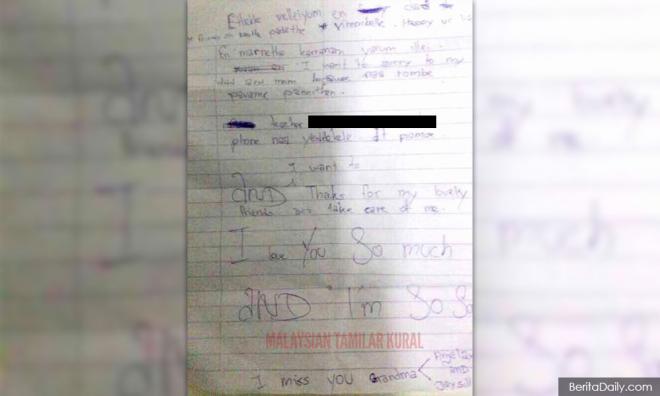 'Teacher, I didn't take your phone', says 13-year-old in note prior to suicide bid

A 13-year-old student is fighting for her life in the hospital after attempting to hang herself at her home in Nibong Tebal, Penang.

In a note, the girl denied stealing her teacher's mobile phone. According to Berita Daily, the incident happened on Jan 24.

The report said despite the Form One student denying the theft repeatedly, the teacher allegedly locked her in a room and demanded her to confess.

After school, the teacher and her husband, who is also a teacher, took the student in their car to her house.

The student was once again accused of stealing the mobile phone, in front of her parents.

Later, the girl penned a note before attempting to hang herself with a shawl.

Among others, the note states, “Nobody is responsible for my death. I want to thank my lovely parents for taking care of me. I am so sorry.

“Teacher, I never took your phone. I promise.”

Speaking to Berita Daily, Batu Kawan DAP secretary Satees Muniandy said the teacher should not have acted in such a manner.

Satees said there are other methods to investigate what happened to the mobile phone, instead of embarrassing the girl in front of her schoolmates and parents.

“I understand that the missing mobile phone is an Iphone 6, which has an app to track the phone.

“I disagree with the girl's decision to attempt suicide... but we must understand that at her age, it is difficult to accept such mental anguish,” he added.

Satees said the girl is currently being treated at Hospital Seberang Jaya and is in a critical condition.