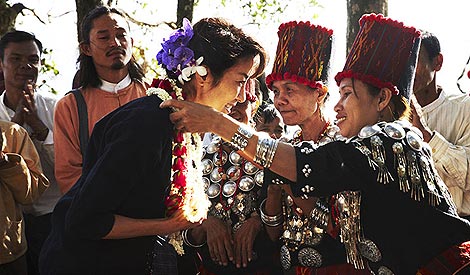 Malaysian born Hollywood actress Michelle Yeoh, who is the goodwill ambassador for the United Nations Development Programme, praised Prime Minister Najib Razak and the Malaysian government’s efforts to help Rohingya refugees and to fight for their plight.

She said Najib and Malaysia had done amazing work on the issue and it was very important for Malaysia as a neighbouring country to help the Rohingyas who faced suffering and oppression in Myanmar.

“We are very proud to recognise the fact that he was the one who championed this in the first place as a good neighbour and doing the right thing as a human being. Our PM has shown great leadership together with the Bangladeshi government with our partners in Saudi (Arabia) and UAE (United Arab Emirates),” she told reporters during her visit to the Rohingya refugees’ area in Cox’s Bazar on Saturday.

Yeoh was part of the Malaysian special delegation to Cox’s Bazar led by Armed Forces chief general Raja Mohamed Affandi Raja Mohammed Noor. The delegation visited the Malaysian Field Hospital that started its operation on Nov 31 and also the Balukhali refugee camp, located about 10 minutes from the field hospital.

Yeoh said the delegation represented Najib and would report to the prime minister once they return to Malaysia.

“It is very important that we are here..because what the Rohingyas are going through is despicable and very tragic. It should not be allowed. Every single one of them deserve human rights that should be given to them,” she said.

Yeoh said she has been informed that there are 1.2 million Rohingyas being displaced, and the world should unite to help them

Meanwhile, Yeoh said Najib also expressed his sincere gratitude to all Malaysian heroes who “are coming in and out” the field hospital.

“It’s just started and they are doing outstanding job. I hope when we go back and report to him (Najib), we would report of the incredible necessary job that has been done for the well-being of Rohingyas and also for any people who are living here. It’s just like providing the emergency services,” she said.

Yesterday, the prime minister flagged off the Rohingya Humanitarian Aid Mission and special delegation to visit the Malaysian field hospital in Cox’s Bazar, at the Subang military air base.

The team comprised 57 representatives from the Prime Minister’s Office, Malaysian Armed Forces and seven members of the media.

The mission would evaluate the impact of assistance provided by Malaysia so far, besides ensuring that the field hospital would be equipped with adequate resources to tackle the medical situation involving the Rohingya refugees.

From the military air base, the special delegation landed at Chittagong airport where they handed over the humanitarian aid to Bangladeshi government before proceeding to Cox’s Bazar.