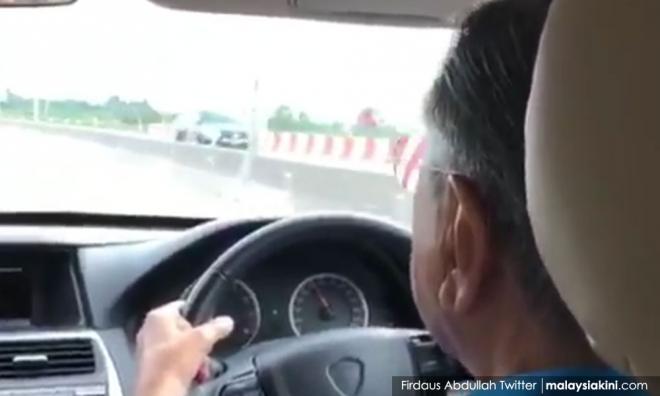 Dr M puts pedal to the metal during weekend drive

Former premier Dr Mahathir Mohamad has re-tweeted a video of him driving a car but keeping the vehicle below the legal speed limit.

The video was originally posted by blogger Firdaus Abdullah, who said Mahathir was doing an average speed of 110km/h.

He also noted how the former premier, who turns 93 this year, has set his sights on becoming the nation's driver once again.

“It shall be a steady ride for Malaysians as we are used to before the thieves hijacked our nation,” he added in reference to Mahathir's tenure as prime minister for more than two decades.

The average speed was 110km/h... by a 93 year old who is all set to be Malaysia’s driver again. @chedetofficial It shall be a steady ride for Malaysians, as we are used to before the thieves hijacked our nation. pic.twitter.com/BS6K31dtvW

It is learned that Mahathir, who is Pakatan Harapan's chairperson and the opposition coalition's prime minister candidate, was driving the Proton Perdana from his residence in the Mines in Sri Kembangan to Putrajaya, located some 25km away.

Malaysiakini was informed that the former premier often goes on weekend drives and is behind the wheel throughout the entire trip.

Mahathir has always harboured a soft spot for Proton cars and was livid when Chinese automaker Geely obtained 49.9% stake in the national carmaker, which he founded.

Following this, the former premier expressed interest in setting up another national car manufacturing firm.

“If I cannot get Proton, I have some ideas about starting another automotive company,” he was quoted as saying at the forum regarding Chinese investments in Malaysia last year.