COMMENT | Anyone who has been trained by NGOs to be polling and counting agent (Paca) in Malaysia would have been told that the spoiling of votes is one of the most frequently used ways to cheat on polling day, and shown ways to detect and prevent such cheating.

I will explain using data from the 13th general election.

For each of the 222 parliamentary constituencies in GE13, we know how many votes were cast and how many were rejected. For each constituency, we can calculate rejected votes as a percentage of the total votes cast.

I will use data for MIC. I have chosen MIC because the constituency which reported the largest percentage of rejected votes was won by G Palanivel, then the erstwhile former president of the MIC.

Of the 222 constituencies, Cameron Highlands had the highest percentage of votes rejected. The number of rejected votes (877) was larger than the majority (462) by which the MIC candidate won the seat.

Segamat also had a high percentage of votes rejected. In Segamat, the number of rejected votes was 950, which was only slightly smaller than the majority of 1,217 votes by which the MIC candidate won. 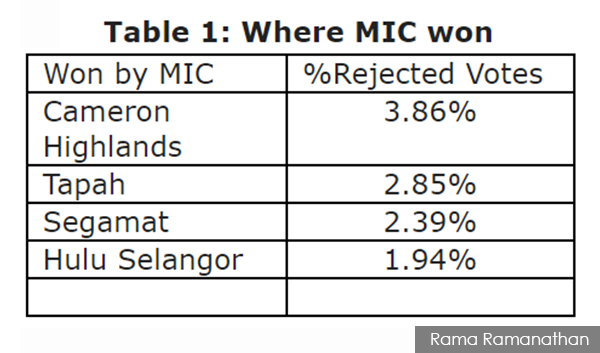 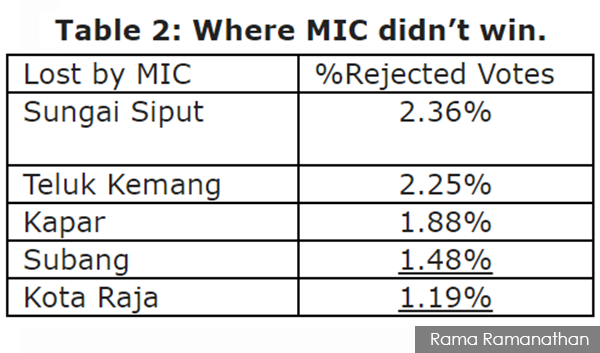 We know from national data that across the constituencies, the percentage of votes rejected was 1.55 percent (174,000 of 11.2 million votes cast). Naturally we would expect that for any party, half the votes rejected would be higher than 1.55 percent and about half will be lower.

From Tables 1 and 2, we see that seven of the nine “MIC constituencies” reported a percentage of votes rejected higher than the national average. (The exceptions are Subang and Kota Raja).

How likely is it that seven of the nine values will be higher than 1.55 percent?

If you toss a coin nine times, how likely are you to get the result “heads” either four or five times? Most of us would give the answer “50 percent chance.”

We can calculate that the chance of getting either four or five heads in nine tosses is 49 percent - about the same as our guess based on our life experiences.

The same theory predicts that the probability of seven “heads” in nine throws of a fair coin is seven percent - very much lower than the “50 percent” which we associate with fairness.

The large difference between the actual value of seven percent and the expected value of 50 percent makes us suspect that the result of seven out of nine may be due to unfair practices (cheating).

Why resort to cheating on election day?

Cheating springs from the knowledge, gained from analysis of past voting behaviour of voters, that some constituencies are marginal – which means it’s hard to predict which party will win.

Often votes must be re-counted before announcing results. A candidate’s chances are “improved” by cheating.

What are the ways of cheating on election day?

On election day, voters “discover” their names are missing; forms used to detect cheating go missing; and many more.

Of relevance to this article is this one – conniving to spoil ballot papers for selected candidates, thus assuring that they are rejected.

Why are some ballot papers rejected?

One set of Paca training materials produced by an NGO includes 22 examples of ballot papers which will be rejected at the counting stage because they have “dirt” in addition to the voter’s choice.

The “dirt” is usually added by the ballot clerk before giving it to the voter to choose his/her candidate. (The term “dirt” is used because this is how the clerk will explain it if questioned.)

Paca are trained to look out for pencils or pens the ballot paper clerk may use to apply “dirt.”

There is no provision for analysis of rejected votes. No one I've spoken to has seen any analysis. We do not know which of the 22 (or more) "types" of spoilt votes are the most common.

Who resorts to cheating?

Here is the data for the parties which dominate discussion in the peninsula (the results include constituencies in Sabah and Sarawak):

MCA managed to get seven “heads” in seven throws of the coin, while PAS managed to get only three heads in 20 throws. It doesn’t take a genius to conclude that the table shows that spoiling votes is a “protective measure” frequently adopted by Umno, MCA and MIC.

Additionally, the top 10 percent scorers in terms of votes rejected (top 21 values for percentage of rejected, regardless of who wins) are all BN parties; of the 21, 11 are in Sabah (Umno: 9, PBS: 2).

Do you think Umno-BN cheats through using spoilt votes?

Let’s be clear about this. Any one party can choose to cheat using spoilt votes. We cannot rule out the possibility that opposition parties will also attempt to cheat in the next election.

We must therefore be alert to minimise the number of votes which are spoilt by persons other than voters. Please sign-up for Paca training.

Yes, voters can choose, of their own accord, to spoil their votes. If they do so, no one will know – because there is no analysis of spoilt votes.

If they do so, some will be very happy because #UndiRosak is a new cloak they can use to cover their cheating.

Look at the data I’ve presented and guess who will be very happy.

RAMA RAMANATHAN is a member of the Bersih 2.0 Steering Committee and a blogger.

Subscribe Today
Read more from this author :
Rama Ramanathan
Read more like this :
#undirosak
#ge13
View Comments
Most Read
Most Commented
Most Recent