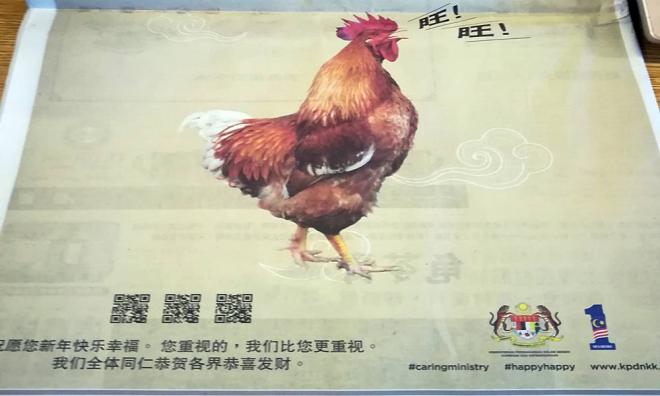 According to the Chinese Zodiac calendar, this Chinese New Year ushers in the Year of the Dog replacing the previous Year of the Rooster.

However, an advertisement by the Domestic Trade, Cooperatives and Consumerism Ministry (KPDNKK) appears to have merged both animals.

The word “wang” is used in numerous Chinese New Year advertisements this year to depict a dog barking but its original meaning is prosperity.

The advertisement also carried a message, which read: “We welcome a prosperous year of the dog. We wholeheartedly wish people from all walks of life a happy lunar new year.”

It is unclear why the ministry opted for a rooster instead of a dog but it could be due to religious sensitivity as the latter is considered “unclean” in Islam.

Malaysiakini has contacted Domestic Trade, Cooperatives and Consumerism Minister Hamzah Zainuddin to find out the reason why the rooster is hogging the limelight in the Year of the Dog and is awaiting his response.

Incidentally, the next Chinese New Year would see the dog making way for the Year of the Pig. The pig is also considered unclean in Islam.

Yesterday, CNN reported that the omission of the dog from Chinese New Year decorations has caused concern among Malaysians of all faiths.

The article said the move is seen as “yet another symptom of the country's growing Islamic conservatism, driven by the government's flirtation with hardline Islamist policies and a cultural shift by religious students returning from the Middle East.”

CNN also stated that Sunway Pyramid shopping mall, which decided not to display dogs because they wanted to be respectful to what they perceive as Muslim sensitivities, suffered for its decision with calls for a boycott of the mall.