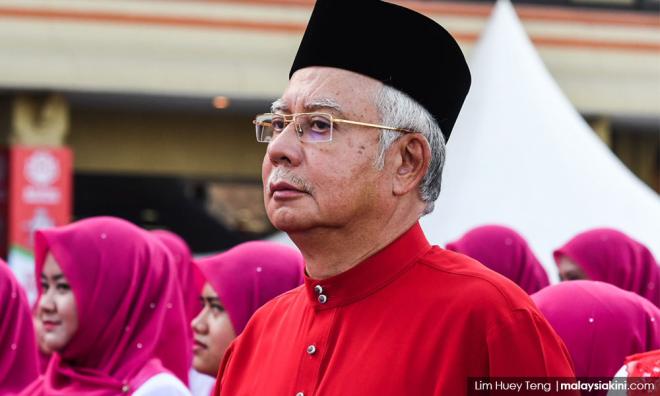 He noted how the opposition coalition has claimed that Mahathir would serve as an interim prime minister and hand over the post to Anwar Ibrahim once the latter is released from prison.

“There are two scenarios which may happen.

“The first, Mahathir will not relinquish the post to Anwar because it is common knowledge that Mahathir considers all other leaders not suitable (for the job),” Najib said in a blog posting.

He quoted Mahathir's statement in 2016 that he would never allow an immoral person to be prime minister.

He said Mahathir also mentioned that Anwar is too old to lead the nation and argued that if the nonagenarian held on to power, it would lead to a PKR rebellion.

As for the second scenario, Najib said if Mahathir chose to make a “U-Turn” (on his stand regarding Anwar) and pass the baton to his former nemesis, this would result in the prime minister and deputy prime minister's posts falling into the hands of a husband and wife.

“This is the most critical level of nepotism practised by them (Harapan). It is certain the people would rebel against (such) a leadership structure...,” he added.

Based on Najib's prediction, Harapan would be squabbling over the prime minister's post for two to three years before its leaders start serving the people, if the opposition coalition wins the GE14.

“However, if the rakyat give BN the mandate, we will start serving the people immediately after the election because we have a leadership which is strong and established,” he said.

Harapan had named Mahathir as its prime minister candidate and Anwar's wife Dr Wan Azizah Wan Ismail, who is also PKR president, as its candidate for deputy prime minister.

In 1998, Mahathir sacked Anwar on moral grounds, but the latter accused the former prime minister of fabricating a sodomy charge against him.

Anwar, 70, is currently serving a five-year prison sentence for a sodomy conviction, which he claims was also fabricated, and is expected to be released in early June.