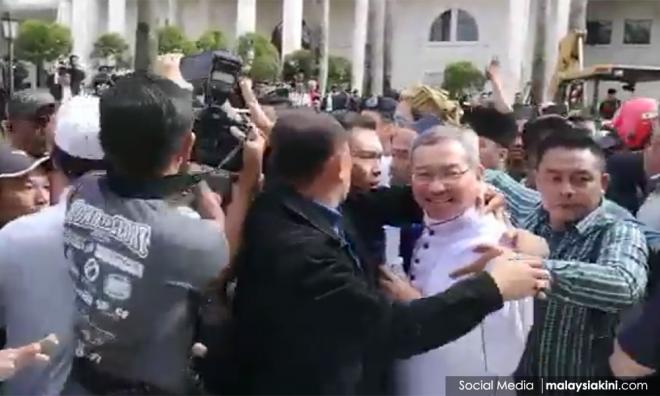 The Sarawak Evangelical Christian Association (Seca) has expressed concern that the territory's long-standing reputation of religious harmony was now under threat and said there is an urgent need for dialogue.

The group, which claims to represent 30,000 members in the state, said this in response to the commotion outside the Kuching court complex following the Federal Court's decision to dismiss an appeal by four individuals who wished to renounce Islam.

Seca described the religious tension in Sarawak to have reached a "boiling point" and thus it was a critical time for all stakeholders to address the "real fear" that Sarawak's "fabric of peace-loving relationships" was under threat.

"The big question we need to answer is how could we, the people of Sarawak (in all segments of our society - religious, civil, and government) who have been zealously guarding our way of life, allow the religious tension to escalate to such a boiling point that expressed itself in the incident in question," it said in a statement.

Seca said that how Sarawakians react to the courthouse incident will determine how future generations live with one another.

This may require the revisiting of the Malaysia Agreement 1963 and other factors in keeping the Sarawakian way of life.

"Therefore, we use this occasion to make a strong appeal to all the people of Sarawak of all races and religions to come together at this critical time of our state to dialogue and find a path forward as one people.

"We hope religious leaders and the government will lead the way. Seca is committed to play an active role to preserve the unique peace and harmony in our beloved Sarawak," said the group.

On Feb 27, a group of hecklers confronted Roman Catholic archbishop of Kuching Simon Poh as he was leaving the Kuching court complex, following the Federal Court hearing.

Several men in jubah and riot police kept the hecklers at bay. However, the behaviour of the hecklers had drawn condemnation.

Seca said that focus should not be placed on this incident in itself but ways to work towards the building Sarawak's unique way of life, commitment towards cultural diversity and peaceful acceptance.

The group said Malaysia's forefathers had taken careful consideration of the diverse cultures in Sabah, Sarawak, Malaya and Singapore.

"Religion was high on the agenda throughout the negotiation process. The kind of religious freedom described as 'complete freedom of religion', deemed vital for the continuity of the ways of life in Sabah and Sarawak at that time, was purposefully granted and enshrined in the Federal Constitution to ensure the safeguard of such continuity in the two territories.

"Our forefathers of all races and religions fought hard for and were in agreement in securing this right for Sarawak.

"The harmonious life that the multiracial and multi-religious communities of our state have been enjoying since the formation of the federation is a great testimony to their wisdom for this," said the group.

Seca said no single ethnic or religious group can realise this vision of Sarawak.

"Pursuing a course that overtly benefits one race and/or religious group over the others or at the expense of others will not bring about the harmonious life desired in our state.

"We need all the people of all races and religions to come together to work towards this dream," it said.