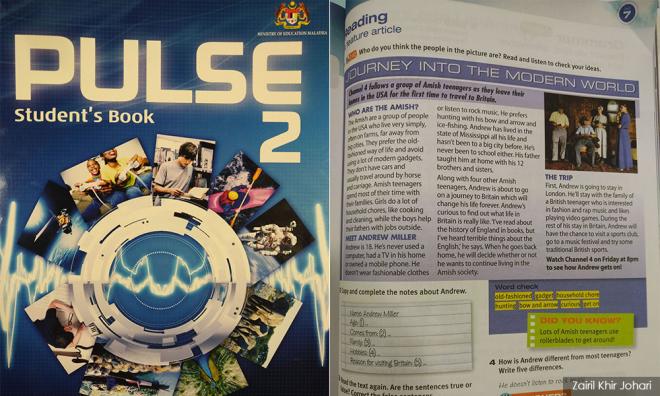 MP SPEAKS | In response to my oral question yesterday in Parliament regarding the decision of the Ministry of Education to replace local KSSR and KSSM English language textbooks with the imported Super Minds and Pulse 2 halfway through the 2017 academic year, Deputy Minister of Education Chong Sin Woon stated that the imported textbooks are not actually replacements for the local ones, but are to be used alongside them.

This response makes no sense whatsoever. Firstly, if what the deputy minister is saying is true, then he has basically admitted that the Ministry of Education (MOE) had spent RM41 million last year for English textbooks for just two cohorts – Year 1 and Form 1 students.

This is based on the cost of the local KSSR and KSSM textbooks, which amount to RM7.1 million, while the imported textbooks cost RM34 million according to a previous parliamentary reply I received.

This is an extravagant sum of money to spend on textbooks, especially when there is no justification as to why there is a need to have both local and imported ones. Furthermore, if local textbooks have already purchased and approved for use, why introduce new imported ones?

Secondly, Chong’s answer also contradicts MOE’s own circulars dated 16 August 2017 and 12 September 2017, which clearly state that the imported textbooks should be used as the “main textbooks for students”, while the local KSSR and KSSM textbooks “can be used by teachers as reference or supplementary books”. The circular also adds that the “KSSR and KSSM textbooks will not be distributed to students.”

Clearly, according to MOE’s own instructions, the imported textbooks are meant to be complete replacements and not supplementary material. In fact, if the circulars are to be followed, the local textbooks will not even be used by students. Unless of course MOE has decided to make another U-turn.

Despite all the fanfare with the Malaysia Education Blueprint 2013-2025, MOE appears to be beset by indecisiveness. Sudden policy changes with confusing and contradictory messages have now become the norm in our education system. This is most unfortunate, as the inevitable victims of such unclear policymaking are none other than our students and teachers.

It is also doubtful how the use of imported English textbooks, at a cost of five times the price of locally produced ones, will result in improved learning. The entire exercise is made all the more questionable when the imported textbooks procured last year at the cost of RM34 million were not procured via open tender, but instead by direct negotiation. Is someone benefitting at the expense of our students?